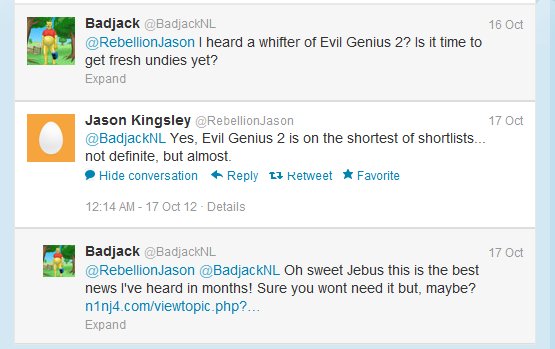 As per a letter Rebellion responded to the Evil Genius Facebook page there will be a true EG2.  Finally some good news. Although until I see it actually released I won’t be getting my hopes up.

Dear Evil Genius 2 Facebook group members and Evil Genius gamers everywhere,
Thank you for taking the time to prepare your open letter on behalf of the community.
We were overwhelmed by the response to the announcement of Evil Genius Online (EGO). Not only were all the closed beta slots taken in less than 24 hours, but we saw the Evil Genius community spring into action. Whether it was through emails, tweets, the online petition, in forums or through your open letter, you made the effort to let us know what Evil Genius means to you as gamers. We wanted to reply to you directly, and although we don’t have time to cover all your questions hopefully this letter will leave you a lot clearer about the future of Evil Genius!
So why did we make Evil Genius Online?

For independent studios like Rebellion to survive it’s important that we look beyond the console, PC and mobile platforms we know so well. Zynga and Facebook are hubs with millions of gamers who can start playing any game in just a couple of clicks. There are almost no barriers. This is why free-to-play is so exciting for both developers and gamers, and yes, it means we can bring Evil Genius to a new audience too.
But hasn’t Evil Genius been on Facebook before?

Yes – Evil Genius: WMD – and it wasn’t up to scratch. We know fans and gamers deserved better. Evil Genius Online is a completely different game and we’ve learned some invaluable lessons since then.
Will social mechanics undermine the traditional Evil Genius gameplay?

While EGO will obviously attract a free-to-play audience, we wanted to create an experience that could be enjoyed by many types of gamers, including Evil Genius fans. Crucially the game doesn’t feature an ‘energy’ mechanic which would limit your play time each day. EGO is firmly mission based, with an open ended story that evolves as the gamer progresses. Yes, each mission takes time to complete and objectives can be accelerated with the use of virtual currency (no pressure applied), but gamers can play for as long as they want and completely redesign their lair to their heart’s content at any time. We honestly believe many of you will really enjoy EGO, but we also understand that we’ll still be disappointing some of you too.
So is this the ‘sequel’ that has been rumoured on Twitter?

When Jason – Rebellion’s CEO and co-founder – tweeted earlier in the year about a potential follow up to Evil Genius, he wasn’t talking about Evil Genius Online, which was already in development by a small team here in our Oxford studio.
We’ve always wanted to make a fully-featured PC follow-up. We’ve taken concepts for an Evil Genius sequel to publishers before but we weren’t able to secure the funding we needed. However since then, we’ve looked into alternative ways to get this game funded and created. We are going to make this happen. And it’s going to be soon.
We’ve been watching the Evil Genius community for some time now, and we’re sorry that we couldn’t tell you earlier about our plans. If anything, your enthusiasm over the last couple of weeks has galvanized our efforts!
In the next few days a key member from our Oxford studio will be in touch. They want to engage with the EG community and get you involved in the first steps we take towards the next Evil Genius game on PC.
Please make them welcome, and don’t be scared to share your ideas!