We would like you to focus on the above for this initial wave of testing and bug reports.

NOTE: Other content and features are in and listed in the notes, but currently not the focus of this testing phase. Additionally, there’s content that is not listed in the notes that are intended for live release and will be added iteratively during the testing cycle.

We would like you to focus on the above for this wave of testing and bug reports.

NOTE: Other content and features are in and listed in the notes, but currently not the focus of this testing phase as they undergo bug fixes and polish. Additionally, there’s content that is not listed in the notes that are intended for live release and will be added iteratively during the testing cycle.

Afterburner: There is now a single afterburner with the ability to achieve higher top velocity under certain conditions, giving us AB SCM and AB Cruise with the only distinction being two different speeds. You can only enter AB Cruise if your flight path is a straight, forward line. Otherwise you’re limited to AB SCM, i.e. while maneuvering/strafing. Once in AB Cruise you can release the afterburner key and go into an AB idle mode to maintain your current speed. Throttle setting and y-axis strafe level allows incremental speeds, but you will decelerate if you change your vector. If you continue to hold AB and maneuver, you drop to AB SCM speed until you return to straight-line flight. AB Idle holds your current velocity as long as you’re not maneuvering and decoupled rotation is allowed while in AB idle.

Ship Start Up: Approach the entry point of your ship, then press and hold “F” to activate the interaction system. Select from the various inner thought prompts using the cursor or mouse wheel to move between them. Once inside your ship, again press and hold “F” and select the “Flight Ready” prompt to run through complete ship start up. Alternatively, you can press the “F5” key for quick start up.

Landing: Landing now takes place through an Air Traffic Control (ATC) system. When close to a landing location, request a landing by navigating to your “Comms” menu on the MobiGlas (note: this is incorrectly displayed as a ship icon) and pushing the hail button (wifi symbol). Wait a moment, and ATC should assign you a landing location. Note, you may need to request take off to leave Levski (trigger opening of bay doors).

Quantum Travel: To quantum travel to a destination, open your MobiGlas (F1) and select the StarMap App (diamond shaped symbol). From there, use the mouse to select a destination. Whether or not an object can be selected for QT is determined by gravitational values (The larger the object the further away you can detect it, large objects with small objects in orbit drown out their detection capabilities at long ranges). Meaning you will not be able to travel from point A to B at all times, but instead may need to move into orbit of a larger body to detect destinations also in orbit. For example, to get to a station orbiting a moon that orbits a planet, the route is Planet>Moon>Station. Once you have a destination selected you can “set destination” on your MobiGlas to bring up a quantum travel target. As before, align with the QT target and press “B” to travel. 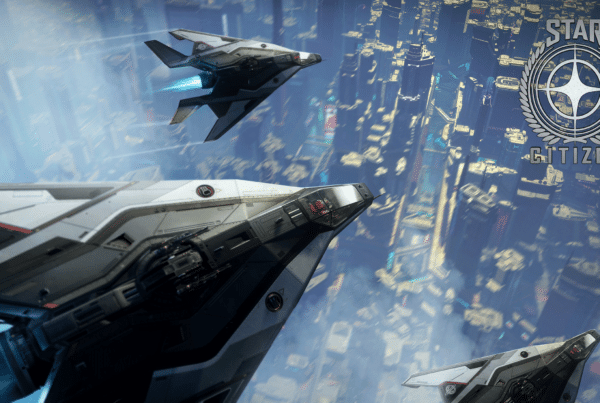 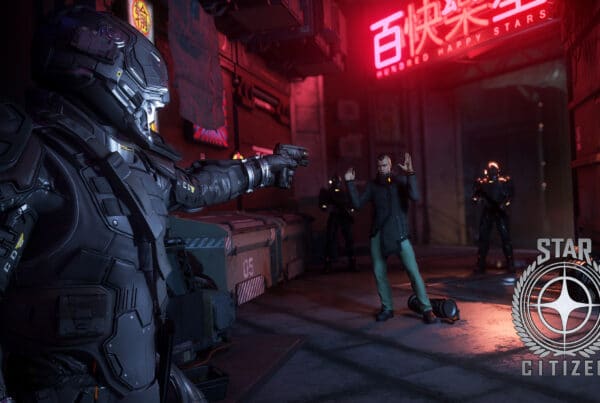