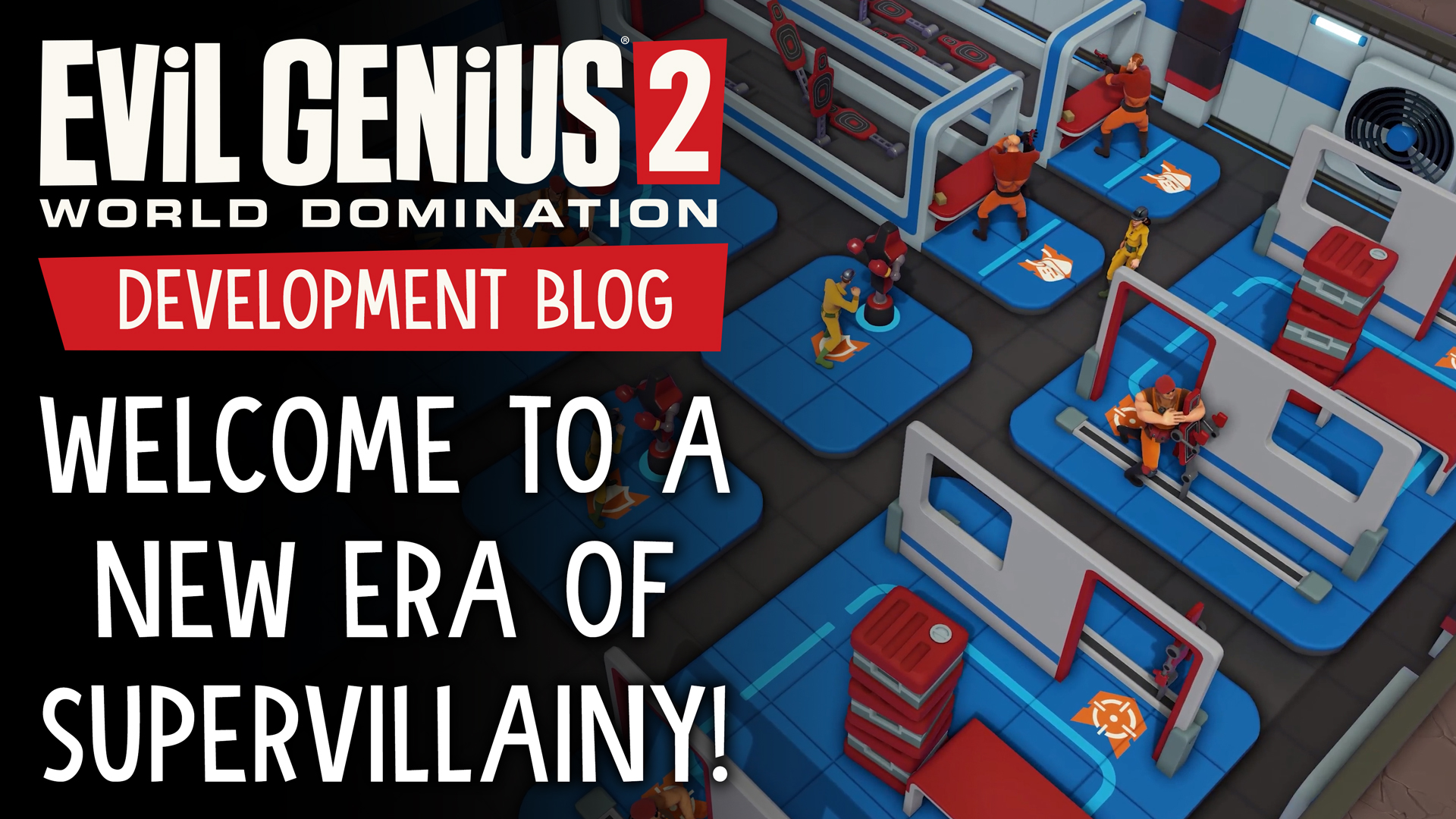 Development Blog – Welcome to a New Era of Supervillainy! 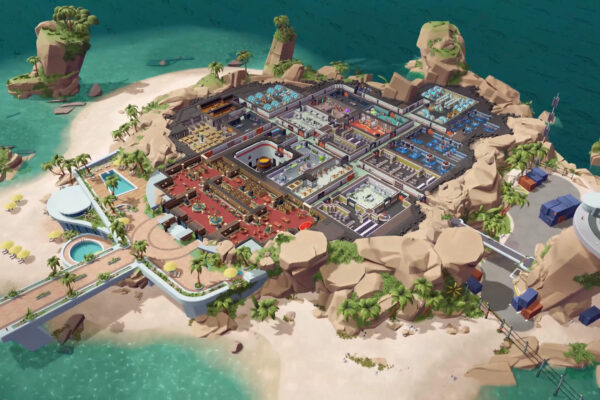 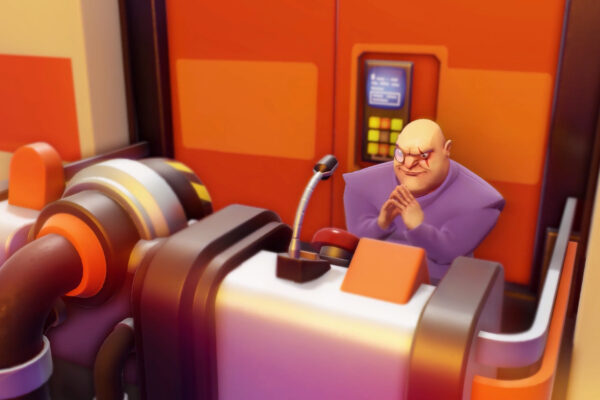 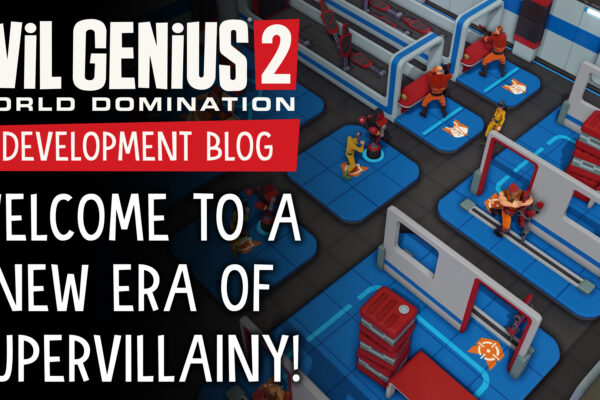 The Evil Genius 2 Development Blog is ready to take over the world!

Please take off your shoes and keep an eye out for the trap door leading to the shark pool – it’s just on the right there.

We know you’ve been waiting patiently to hear more about Evil Genius 2. I’m so excited to launch the blog today and start filling you in on what to expect from our lair-building sequel.

Our dev team will be posting entries regularly – every two weeks to start off with – and each one will focus on a particular aspect of the game. For those of you ravenous for new details and reveals, we’ll have plenty of those. We’re going to be diving deep, folks! We want to show you exactly how we’re going to make Evil Genius 2 the best thing since, well, the first Evil Genius.

For today’s post, I wanted to do a quick re-introduction to Evil Genius 2 for fans new and old before sharing brand new details on two of my favourite new mechanics that we’ve not yet talked about…

HOW TO TAKE OVER THE WORLD

In Evil Genius 2 you play as a mastermind running your secret lair on a tropical island. You build and develop your HQ, train an army of loyal minions, commit nefarious crimes across the globe, and do battle with the Forces of Justice.

You do this and more in a story-based campaign stuffed with content, including loads of optional side missions. Your final goal is to unleash your Doomsday Device upon the world, achieving nothing short of – pause for effect – World Domination! MWAHAHA!

How you achieve World Domination depends on the Genius you pick. In Evil Genius 2 you can play as one of four different Geniuses each with their own campaign. So yes, that’s four different campaigns for you to enjoy, including their own storylines, exclusive missions and Doomsday Devices.

The four antiheroes of Evil Genius 2 are Max, the returning visage from the original, Red Ivan, our former henchman-turned-supervillain, and the two others whom we’ve cruelly withheld details on. In a future post we’ll talk about all four Geniuses and their unique traits and abilities in-depth.

You can also pick from one of three different islands in Evil Genius 2 and each island has a significant impact on gameplay. Then there’s the cover operation; the gaudy front-of-house casino that acts as an illusory shield in your lair, hiding the cunning machinations going on behind. In Evil Genius 2 your cover operation is part of your lair, and how much you take advantage of it is up to you.

Evil Genius 2 is a fully-fledged sequel. It’s not a remaster or a remake. As you can see in our recent (awesome) gameplay trailer, the look, feel and heart are familiar, and there are loads of brand new things to get excited about, from evolutions of original ideas to brand new content and mechanics.
We want to give you lots of ways to play Evil Genius 2 and lots of reasons to keep coming back to it.

Now, I’m aware there are many of you die-hards out there ravenous for new info. While I’m trying to stay on brand, I’m not evil enough to not throw something new your way and make you wait for our next dev blog post in two weeks’ time. So here are a couple of my favourite new things in Evil Genius 2 that we’ve never talked about before until today.

THIS IS BRAND NEW INFORMATION

Let’s say the Forces of Justice are hunting through your lair for evidence of any wrongdoing. Let’s say that evidence is… organic in nature. As in it used to walk around and spy on stuff until you stopped it from walking around… Well, now the incinerator is your friend. This brand new device is a very clean way of disposing of all manner of evidence, offering an effective and efficient way to avoid that issue of body-shaped litter cluttering up your lair. Nobody likes a messy mastermind.

Another one of my favourites is how your Genius can influence the minions around them with their Evil Genius Aura, making them rush to your side with one simple order.

For example, Red Ivan – the terrifying madman that he is – can command minions around him to “Do it NOW!” His peons will run to him from far and wide to appease their overlord, gaining a temporary boost to their combat abilities thanks to Ivan’s intimidating stature. This is a particularly useful ability when things are going haywire and you have to get personally involved.

Of course, if you have to get involved personally as a Genius, it’s probably because some dim-witted minion messed up. Luckily, in Evil Genius 2 you can simply target that lackey and make sure it is the last time they’ll ever fail you – by squeezing the trigger!

These are just a few specific examples of how we’re both introducing new content and evolving and modernizing ideas in Evil Genius 2, all while staying true to the original game we all know and love.

Right, that’s all the new info I can spill today. You’ll just have to come back in two weeks’ time!

On behalf of the Evil Genius 2: World Domination dev team I want to thank you all for the love and support you’ve shown us so far. We’re so excited to be working on Evil Genius 2 and we can’t wait to show you more. Until then: Stay tuned, stay evil.