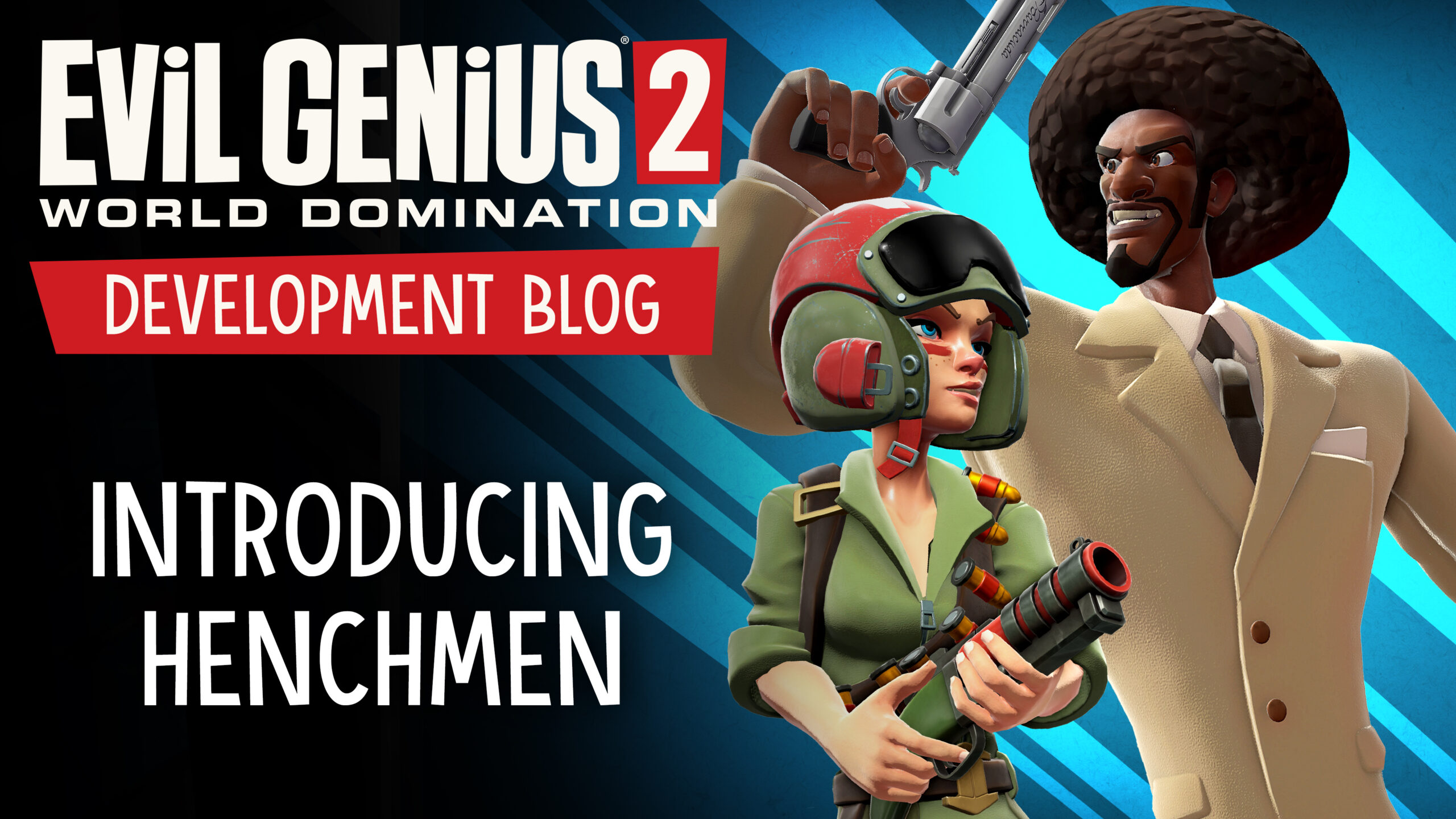 Let’s talk about how we’re putting our own spin on one of the original Evil Genius’ key features – everyone needs a powerful Right Hand! 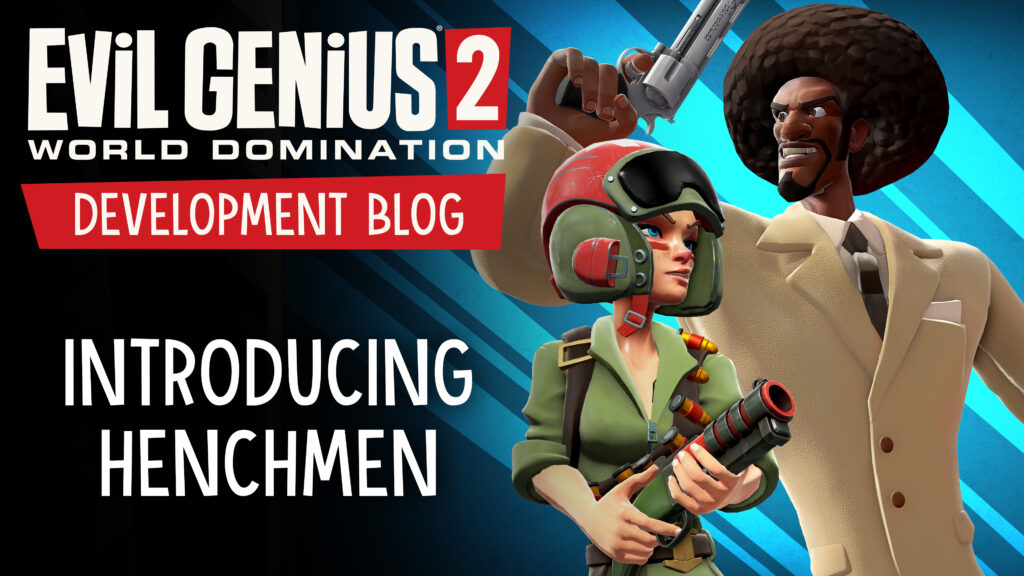 Hello! My name is Rich Edwards and I’m the Lead Designer on Evil Genius 2: World Domination. I can’t tell you how excited I am to be here talking to you guys about our game. But let me give it a go.

I joined Rebellion to work specifically on Evil Genius 2 as a massive – and I mean massive – fan of the original. This is my dream project and I’m so thrilled to be finally able to talk more about it.

Two weeks ago our Spin Doctor Sadie launched the Evil Genius 2 Development Blog and she promised you guys some brand new info in future posts. Well, here we are!

In today’s Development Blog post I’ll talk about one of the key aspects we’re reprising in Evil Genius 2 and how we’re putting our own spin on it. Let’s dive into the world of Henchmen.

The Best Bet for Odd Jobs 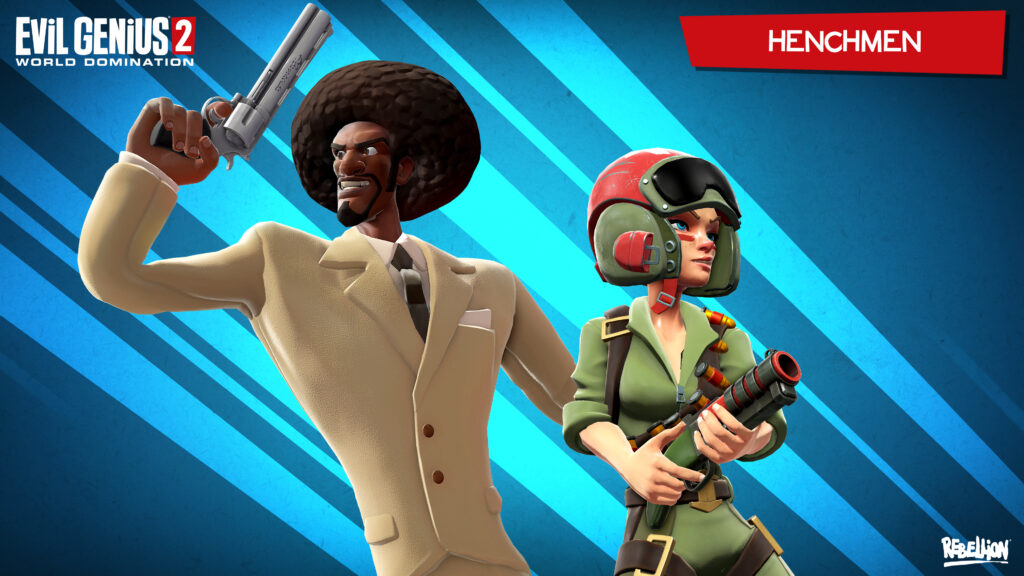 In Evil Genius 2, you’re going to embrace your Inner Mastermind – the one we all know you have – and make a bid for World Domination. You’re the big picture guy with a horde of loyal minions, but sometimes you’ll need a powerful Right Hand.

If the Genius is the leader of the Lair, then Henchmen are the next rung down. If you’ve got something that needs doing immediately, that is of utmost and urgent importance, then Henchmen tend to be the best way to get things done. Henchmen don’t start off as your lackeys, though. As you begin and progress through each of the campaigns in Evil Genius 2, you’ll encounter them as Crime Lords.

Crime Lords are scattered across the world. As you explore, you’ll encounter them as impressive adversaries who have their own criminal empires. Like you they’re absolutely terrible pieces of work, but unlike you they lack the ambition, scale or power to take over the world.

Each Crime Lord has their own side story featuring three separate objectives. These are significant, optional missions that will take you some time to complete. Once the dust settles, you’ll be deciding their fate. It’s up to you to decide which of these Crime Lords you want to coerce to help you on your path to world domination, and which you decide to… do away with.

For example, you’ll catch the attention of Eli Barracuda Jr. by committing enough crimes in his territory. Do that and the all-muscle-and-smiles Crime Lord will make himself known and attempt to solidify control of his empire.

Once Crime Lords make themselves known their side-story objectives put you in direct conflict with the malefactors themselves.

I want to reiterate that these are side missions separate to creating your big old Doomsday Device and taking over the big old world. Pursuing a Crime Lord comes at the cost of deviating resources from that main objective.

There’s also a risk that the Crime Lord will invade your Lair with a team of their goons in tow and kill some minions. “So what?” I hear you say. “I’ll hire some more.” I like the way you think, but let’s be clear: They may also break your equipment, steal your Loot, sabotage your Doomsday Device… or even commit the worst sin of all and attack you directly. Needless to say, you can’t rule the world if you’re dead.

Of course completing the Crime Lords’ side objectives gives you the option to extend the hand of friendship – Worst Friends Forever – and help resolve whatever issues you two crazy kids had. Then the Crime Lord will officially become a Henchman and part of your growing entourage. It’s a bit like having an arch enemy, then discovering that you have a lot of things in common, like a love for tropical islands, underground Lairs, and death rays. Because that’s exactly what it is.

You can have up to five Henchmen in your employ at any time, and we have a fair amount more than that in total. Today, though, let’s pick two and go into detail on them, shall we? And where better to start than two who made their debut in the recent gameplay trailer. I’ve already mentioned one of them, so let’s start with Eli Barracuda Jr.

All Charm, Plenty of Bite 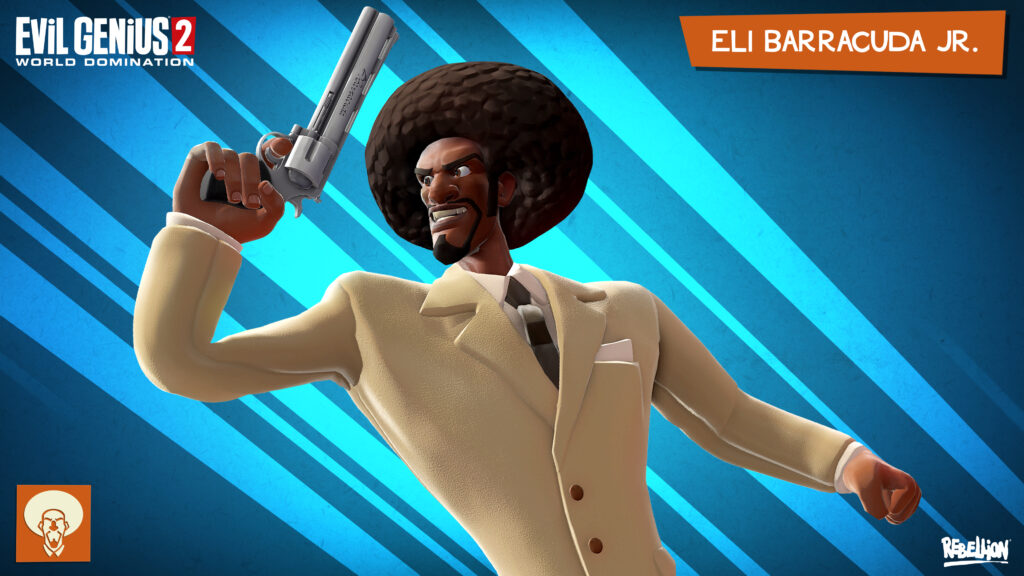 Eli has never been impressed by the Evil Geniuses of the world. You see, while they might have gotten by with mad science or legions of disposable minions, they very often lacked _charm_. Eli has built his brand on that, making his name in the New York underworld as a skilled businessman and negotiator. Now he’s a Crime Lord who rules with a winning smile and a dangerous glare. He’s the king of all kingpins and if you come for his territory he’ll defend his kingdom without hesitation.

As a Henchman, Eli brings considerable charisma and muscle to your arsenal and he will respond directly to your commands. Unlike Minions – the yellow-suited, lowest-rung subordinates you’ll have seen in our trailers – each Henchmen has two special abilities that you can use at any time.

Eli’s first ability is his legendary Charm. Order him to speak to an Agent and he’ll stroll over, sling an arm around the Agent’s shoulder and explain to them that there is nothing suspicious going on at this island. Why, yes, I am notorious Crime Lord Eli Barracuda Jr, thanks for asking, but I’m on holiday at this regular, run of the mill, tropical island Casino. Nothing to see here, okay? Good. Don’t you forget it.

It’s a potent ability that lets you defuse a potentially dangerous situation without commotion.

Eli’s other ability revolves around his, well, silver revolver. While Eli proves very useful in close-range fistfights, using this ability makes him utterly lethal with six bullets at long range.

We’ve mentioned previously that Minions can progress along three different archetypes: Deception, Muscle and Science. Henchmen tend to fit into these archetypes too, and Eli is proud to be considered Muscle. So while you should never neglect his ability to charm the enemy, you’ll definitely want him on the front lines when a fight breaks out.

Another Henchman you’ll want to have around when things get dicey is Full Metal Jackie.

We Need Guns – Lots of Guns 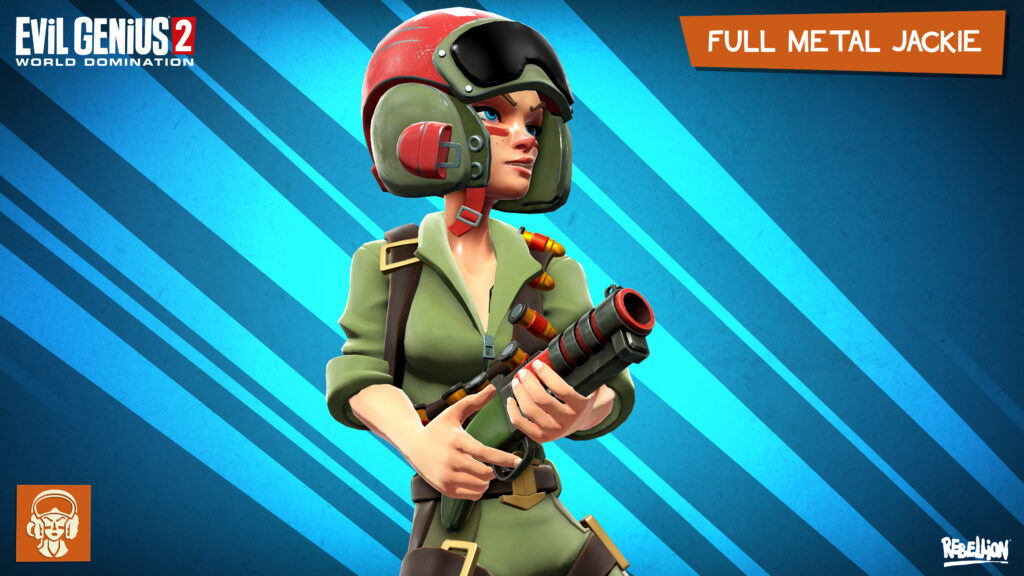 No-one knows her real name – not even me. But what we do know is that Full Metal Jackie was once upon a time an Australian air force veteran. Travelling the globe, she learnt that selling weapons was a much better hustle than using them.

As a Crime Lord, follows the law of supply and demand, often setting up shop wherever there’s conflict. She’s absolutely willing to make an enemy if it lets her make a sale.

As you play through Evil Genius 2 you’ll realize the Crime Lords of the world are often well armed. They have to be getting their arms from someone and that someone is Full Metal Jackie. Now, you can’t have someone arming your enemies, can you?

Over the course of her missions you’ll pose as a buyer to attempt to secure a lucrative contract with her. However, Jackie’s far from stupid. Your Lair is home to the biggest weapon an arms dealer could hope to sell – your Doomsday Device…

As a Henchman, Jackie offers a very different set of skills to Eli, but she can also be devastatingly powerful in combat. Her default weapon is no less than a grenade launcher!

As if that weren’t enough, activate her Fire Sale ability, and she’ll unleash a barrage of incendiary attacks on your enemies. The end result is a tonne of damage, although some of that is going to be of collateral…

Jackie’s other special ability, Hand Guns, allows her to embrace her mercantile nature, literally handing guns to your minions. It’s a great ability to have to hand when you’re under attack.

Henchmen are imposing forces in your Lair. You can send Minions on missions, but Henchmen are far too important to risk on the world stage. And yet they still impact the world from afar.

Henchmen can cause new missions and opportunities to become available across the globe. They can also change the landscape for you as a Genius seeking to commit nefarious acts. Recruit Eli and the criminal enterprises in what was his area will become more receptive to you.

Each Henchman brings something different to your organisation. I’ve only talked about two in today’s post but I want to leave you with this: These Henchmen play a key role in your strategy, helping inform your path to World Domination. Decide carefully which ones you’re going to bring into the fold and which you’re going to keep at arm’s length. There’s a lot more I could say about that but I think I’ve talked plenty for now!

We’ll back in two weeks’ time with another post. In the meantime, I’d like to encourage everyone to check out the Evil Genius 2 Discord channel if you’re not already part of it. There are loads of fans in it already and it’s a great place to discuss everything Evil Genius.

Right, that’s absolutely enough talking for now. Thanks for reading – see you in the next post! 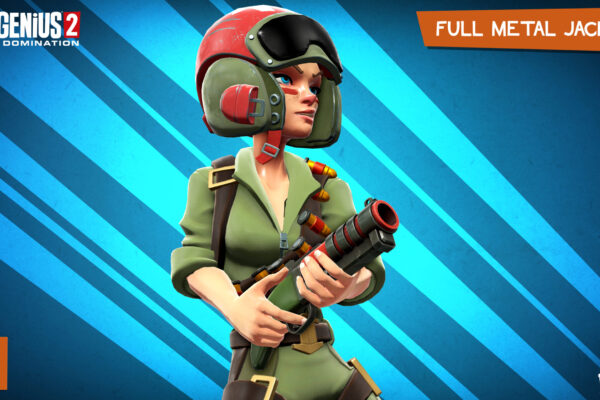 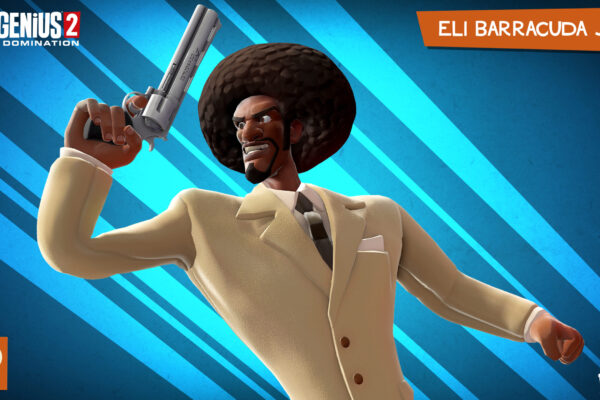 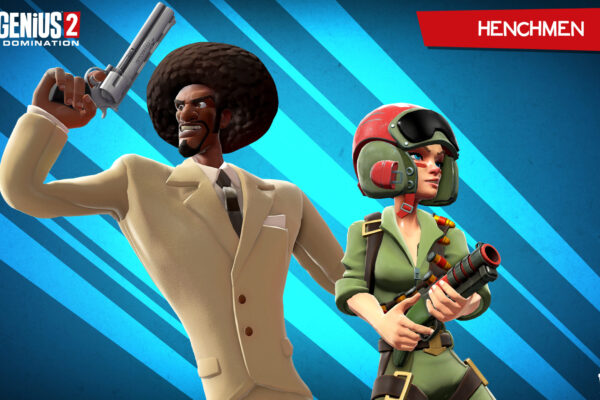 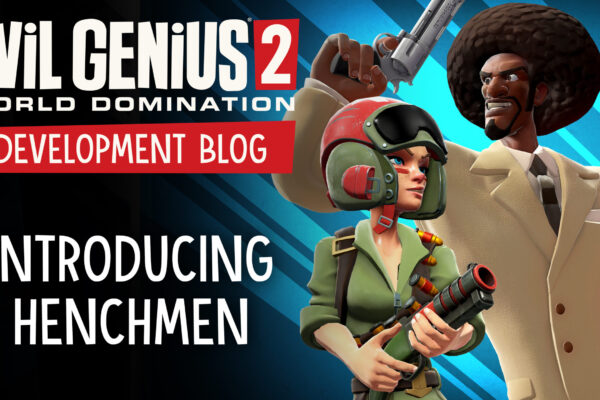