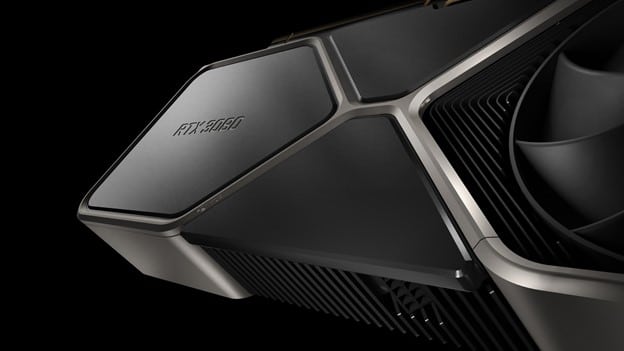 The folks over at Nvidia recently announced their latest line of graphics cards, the GeForce RTX 30 series, which features the 3070, 3080, and 3090. All of the hype and fanfare surrounding a release of this magnitude can be a little disorienting, so we dug through all of the promotional material and technical specifications, so we could break down the new features Nvidia’s 30 series of cards brings to the table.

New to the GeForce RTX 30 series of cards is GDDR6X graphics memory, which Nvidia developed in partnership with Micron. GDDR6X harnesses the power of artificial intelligence to obtain speeds of up to 1 TB/s system memory bandwidth, a huge improvement over GDDR6. GDDR6X is a product of Micron’s Ultra-Bandwidth Solutions, which aim to achieve maximum bandwidth memory for gaming and design. It is important to note that GDDR6X does not come standard on all three cards, and is only available in the Geforce RTX 3080 and 3090.

Deep Learning Super Sampling (DLSS), uses artificial intelligence to render images with less pixels, boosting performance and rendering overall higher resolution images. RTX 30 series cards come standard with DLSS 2.0, which has come thanks to new generations of ray tracing and tensor cores, which boost ray tracing performance by 2X, and improve all of the AI based programs that the cards use. Nvidia is also introducing a DLSS Ultra Performance Mode, which is designed to boost 8k gaming and streaming performance.

Nvidia announced DirectX 12 Ultimate earlier this year, and it will now be standard on all of the 30 Series cards. According to Nvidia, their newest graphics API makes game development much more efficient by providing ready-made tools and middleware. It also supports Nvidia’s latest generation of ray tracing, as well as mesh shaders and variable rate shading. Mesh shading prevents performance bottleneck while increasing the amount of visible detail, while variable rate shading allows developers the ability to render images at different levels of detail while increasing performance.

Not only have Nvidia added some great new features with the RTX 30 series of cards, they have also implemented a brand new architectured called Amphere. According to Nvidia, the Amphere Architecture relies on artificial intelligence and high performance computing (HPC) to “drive unmatched acceleration at every scale.”

The GeForce RTX 30 Series of cards is expected to release September 17th, and you can stay in the loop by signing up for email updates from Nvidia here.

UPDATE: Supplies have been limited, but you can follow to be notified or purchase on Amazon here.