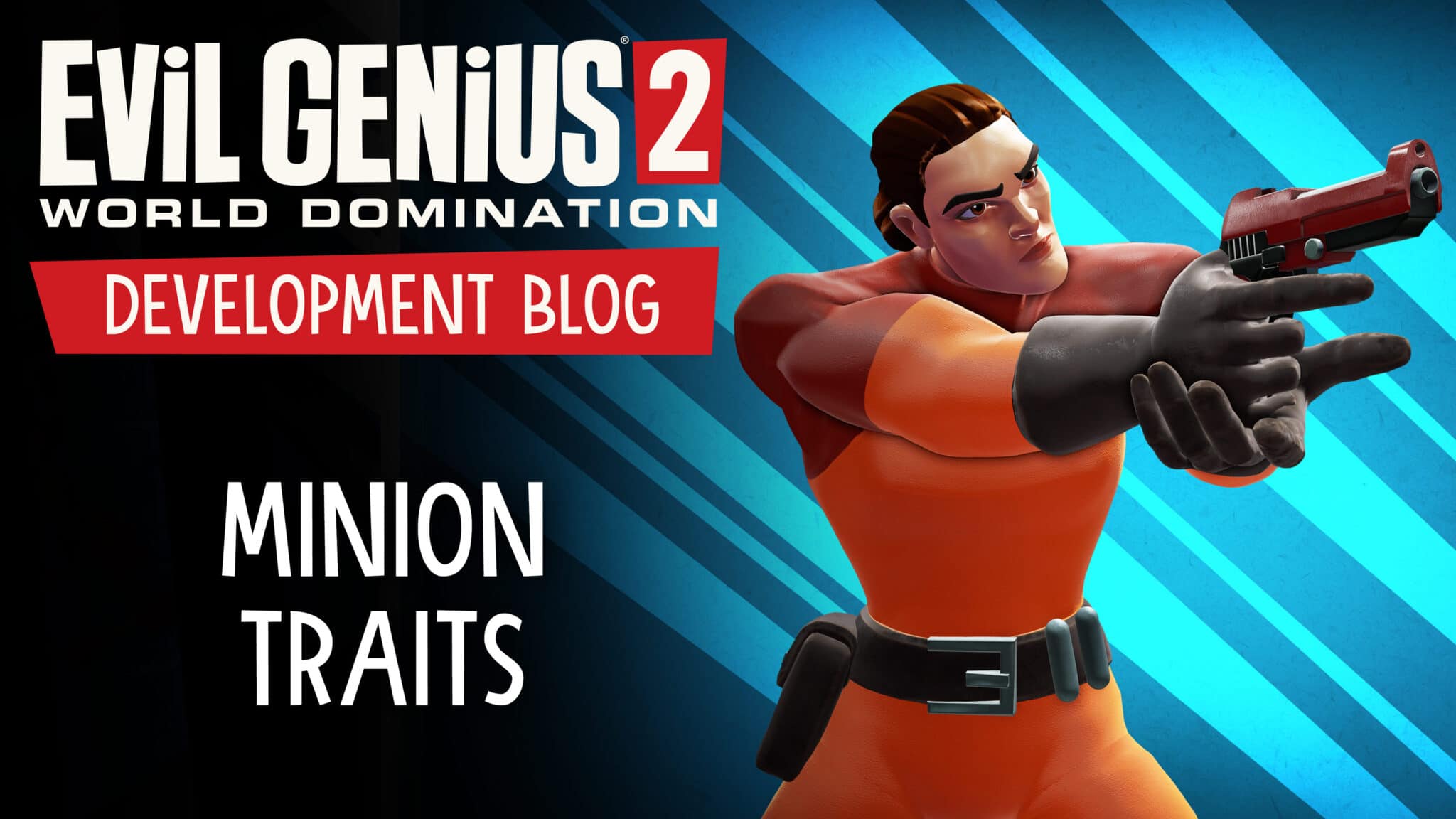 We’re here with another Development Blog, this time covering minion Traits. It’s a broad topic, but every character in Evil Genius 2 can have Traits – these inform the personality and the behavior of that character. Traits come out in all sorts of different ways, so let’s dive in and see what they’re all about. 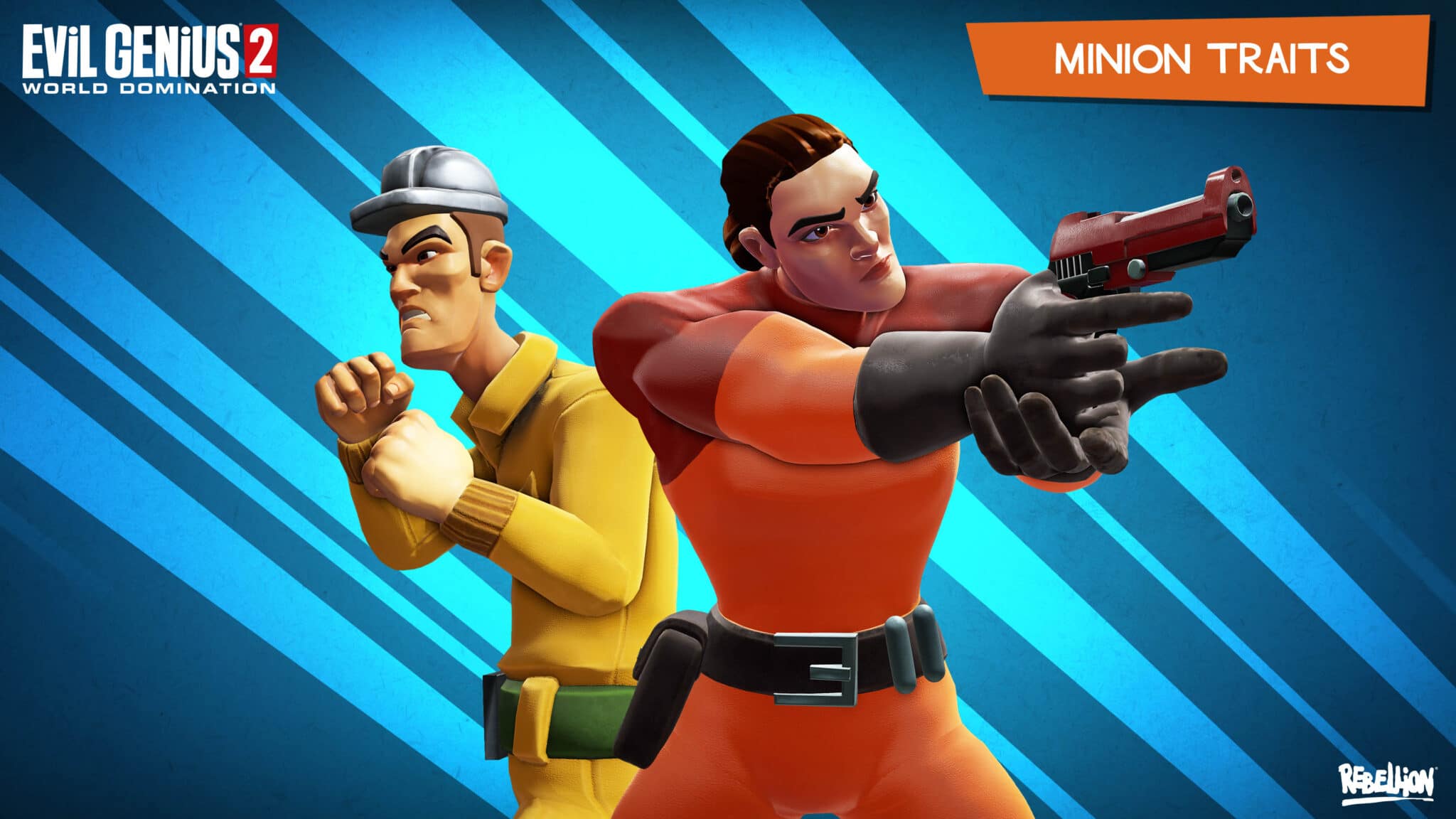 I’m going to address the unspoken first. You and I are two different people. I enjoy puzzles, I’m soft spoken, and I wear comfortable hoodies. You’re a fan of Evil Genius 2: World Domination, so I’m going to take a stab in the dark and say you’re some sort of incredible super being, blessed with amazing charisma, a keen mind, and excellent taste. Aren’t you amazing?

In Evil Genius 2, we call these differences Traits.

Whenever a new character is called into existence they are assigned a number of Traits. Perhaps they’re a Homebody, or have a Fear of Needles? They could be a Workaholic, or have a Sweet Tooth too.

Traits run the gamut from sillier little Easter Eggs (watch your minions closely for some of those), through to them being former Agents, with the ability to see through disguises more effectively. Certain minions could have disastrous traits, which might even work against you.

Did you know that a minion can be Oblivious? This means they can’t see through disguises, letting enemy Agents run rampant – a trait to be avoided. They could also arrive in your Lair with a nasty case of Hay Fever? A sniffling worker will do everything they can to avoid becoming a Biologist – but if they do, and they have to work with dangerous, pollen spewing plants in the Laboratory? Well, then they’ll lose health more rapidly.

Minions can have a number of traits, so make sure to inspect your workforce regularly. If you want to get in there, micro-manage and root out the weaker employees, then you absolutely can. In fact we encourage it. Who wants to employ a Lazy, Oblivious Worker when you could hire someone is Dedicated and Oblivious? Wait – that’s isn’t much better…

While you can’t filter minions by Traits when employing them – an Evil Genius doesn’t involve themselves in middle management. Instead, it’s simplicity itself to execute a minion after recruiting them. Not only does this… terminate their employment, it also provides a temporary boost to any witnesses. After all – if you saw someone executed in front of you, you’d probably work a little harder, too.

(Editor’s Note: that isn’t how Rebellion operates. We’re much fairer. All executions are done in trial by combat.) 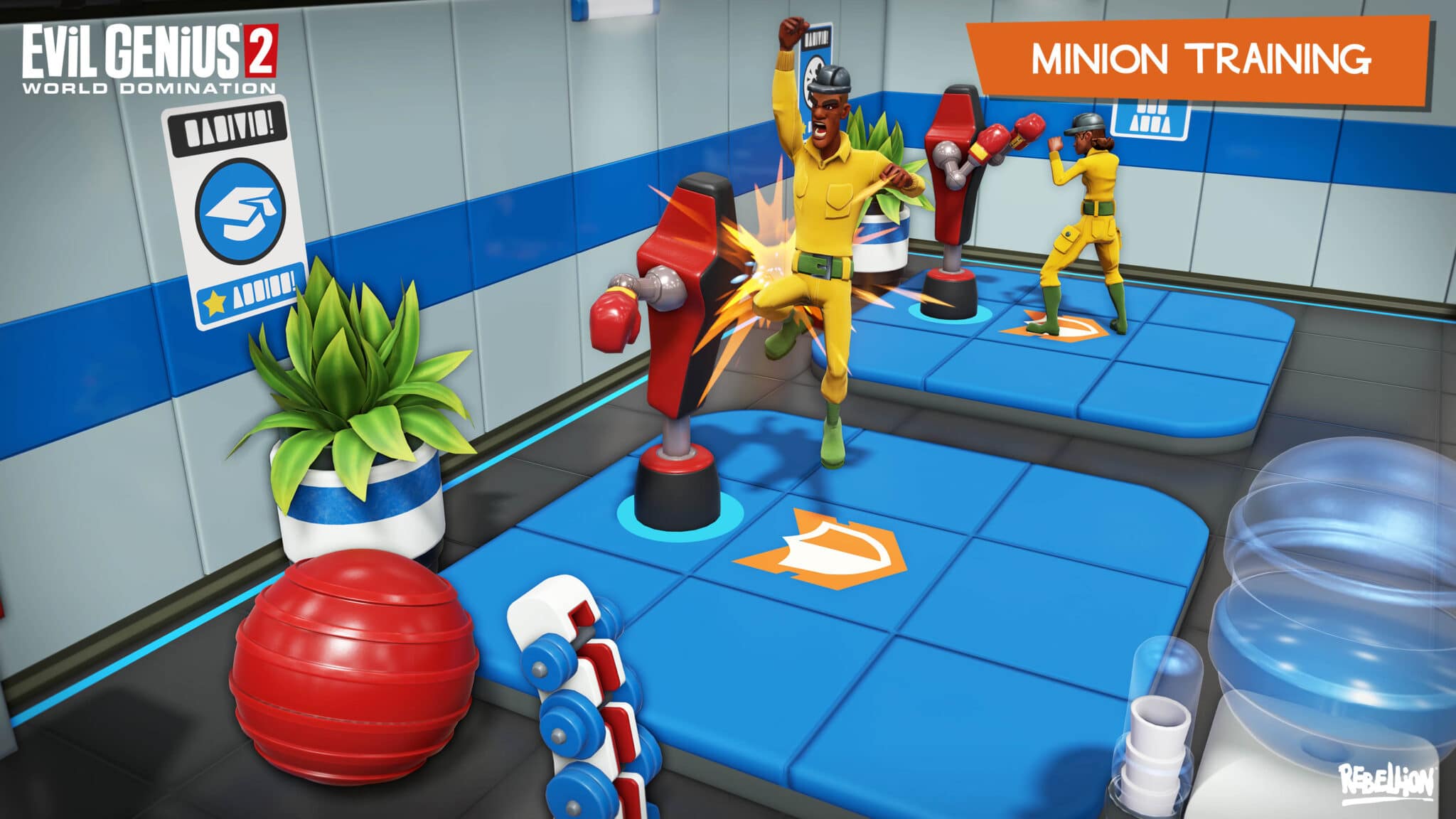 Every worker minion in Evil Genius 2 comes to you with a basic set of traits. However, when you skill them up through training methods, they become inherently better in one aspect. So a minion might retain some traits, but they’ll gain new attributes. Some traits, like Pacifism, might even disappear with enough combat training.

There’s nothing quite like making a minion punch something enough until they enjoy it. Not that you’ll be overseeing this process every single time, mind. Training is mostly big picture stuff – if you say ‘I want X Guards and Y Technicians’, your minions will then organize themselves into teams, training themselves up automatically until they can call themselves a Guard or a Technician.

However, that could take a while, a potentially daunting prospect if you need specialized minions a little quicker. So, you can assign existing minions to assist with training, speeding up the entire process. Your minions are always helping train their own replacement, filling in slots based on how many specialists you want. Nobody wants to get involved in micro-management. There’s a World to dominate, and that’s Big Picture Stuff.

As any Lawyer will tell you, all Crime comes in one of three flavours. It’s either a Muscle crime, Science-y, or mired in Deception. That’s why we themed our minions after these three criminal aspects, creating the Muscle, Science, and Deception Tree.

What can I tell you about the Deception Tree? It’s instead a career path for minions who excel at keeping your enemies misinformed.

Let’s take a look at how your minions can help reduce the stats of your enemies, and keep your Casino running! The Deception Tree covers all the minions that can work in the Casino, ensuring no Agents infiltrate your Lair, keeping them all handily distracted. Valets are the lowest rung of this ladder of lies – keeping people occupied, but their powers can only stretch so far. Eventually, they’ll progress to becoming a Socialite or Spin Doctor, who can in turn become a Counter Agent, the final tier of The Deception Tree.

The Casino is a necessary part of keeping your Lair running. After all, without it your Island is just your lair, making it the perfect target for the Forces of Justice. When operating your Casino, Tourists will naturally flood to your island – who could resist gambling in paradise? Unfortunately, they tend to distract Valets from their real purpose – distracting Agents. Which brings us to…

Drumroll please. Swing a spotlight over this way because our next minion won’t put in an appearance unless we make a fuss. Enter the Socialite. 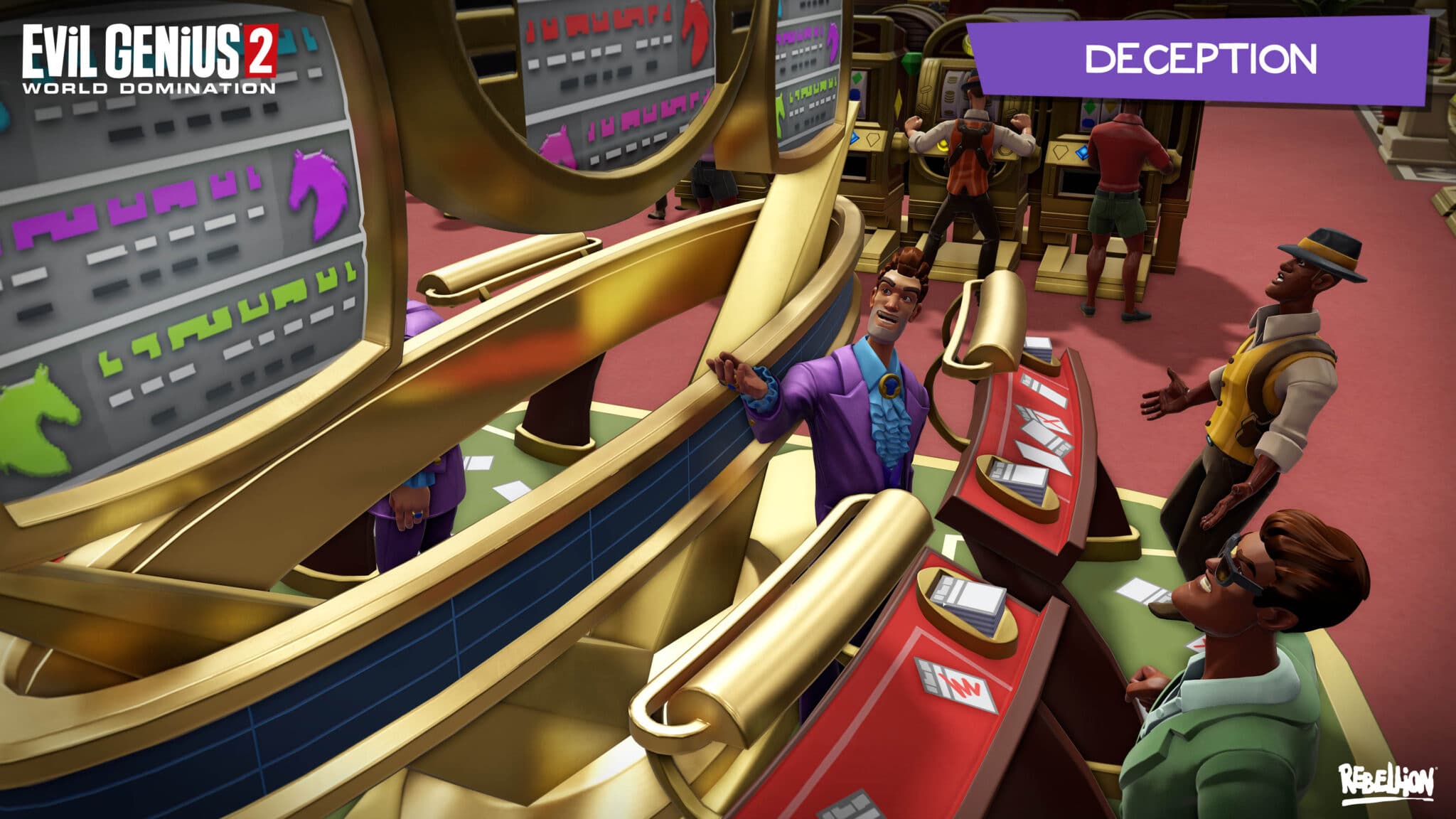 The Socialite is a loud, brash presence, who draws a lot of Tourist attention, allowing your other minions to distract more Agents. Sometimes, being a chatterbox does help.

The Spin Doctor, on the other side, acts as a sort of damage-dealing character, reducing the skill of any Agents that are approaching your lair – confusing them for a while, ensuring they can’t do their job effectively. If any Agents do stumble across anything suspicious, then the Spin Doctor will be right there with them, ensuring that everything is normal – Look, every Casino has a ray gun, have you even been to a Casino before?

And lurking behind the scenes this whole time is the final Deception Minion: the Counter Agent. These folks are incredible at seeing through disguises, and lowering Agent skills – rooting them out and damaging their ability to perform their mission before they even set foot in the lair. They won’t convince them to go home, but they will ensure that Agents can barely perform. A good combination of all of these minions will ensure a flawless operation. For more details on how to keep your Lair running smoothly…we suggest you wait for our next blog post.

Minion traits is a complex system, but I hope I was able to give you all enough information to excite you. We’ll be back in another two weeks with another Dev Blog, so see you all then. Remember, make sure to check out the Evil Genius 2 Discord Channel to discuss this post and anything else Evil Genius 2 related.

I better get out of here, my producer is getting out the dueling pistols. It would appear that whole ‘trial by combat’ thing was no empty threat. Until next time!

Get The Original Evil Genius Game