Fall Guys, is a charming and fun family-friendly battle royale that faced many issues during its launch back on August 4. Most of these issues were due to bugs and server complications. Regardless of the flaws, Fall Guys continues to weather the storm with its adorable quirks, character design, and over-abundance of interesting cosmetics to keep players hooked.

One of Fall Guys’ biggest influences has to be TV game shows in the same spirit as Wipeout and Floor is Lava. Each show consists of several rounds with each round designed to whittle down the total group of 60 players to one lone crownholder. The simplicity in the controls makes it an easy game for anyone to join in. However, the game isn’t actually all that easy. The obstacles, including other players, can be downright frustrating, creating an uptick in difficulty based on the player’s skill level and desire to “give it another try.” Compound that with the short time of each match and you have a perfect formula for an addictive experience.

Making the game even more accessible to a broader player base has been one of the catalysts catapulting the game’s popularity. There are no difficult to manage loadouts or metas to contend with thanks to the easy-to-use controls. Aside from walking, Fall Guys allows you to grab, jump, and dive. Most of the maps will require the use of all three skills. The gameplay may seem shallow on the surface but I can assure you that the more you play the more strategies will present themselves.

Most of the games are fun with only a few to really groan about. But this is formulated based on my own personal opinion. The bulk of the rounds are solo-based but there are team-based ones as well. This forces you to work with other players, the same ones you’ll likely face in the very next round if you survive. All games are on a rotation and, from what I’ve experienced, the amount of remaining players also plays a part in determining what comes next. 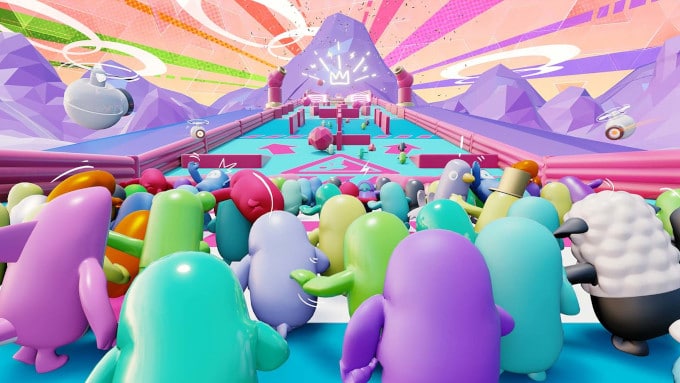 Some games are a race to the finish line in which you and the other players make a mad dash across the obstacle-riddled map in hopes of being one out of forty who will move onto the next round. Other games include outlasting other players, meeting specific criteria, and teaming up with players to accumulate points.

The primary issue that Fall Guys faces is on its backend. The severe problems and bugs have been mostly fixed but each new game brings its own share of issues. Seeing as the team behind Fall Guys, Mediatonic, is only manned by 13 people, players will have to learn to be more patient. The popularity of the game has been growing pains for the developers but the team continues to push forward despite these hardships.

What makes the game so family-friendly is that unlike a traditional battle royale, Fall Guys doesn’t require you to shoot opposing players to win. Whereas games like Fortnite and PlayerUnknown Battlegrounds, PUBG for short, are team based shooters, Fall Guys offers a fun and goofy take on competitive edge. Push or pull your “enemies” into obstacles, nudge them off the edge of the many platforms spread throughout each match, and block them from crossing the finish line. An obvious far cry from the other games crowding the battle royale genre and one to keep your eye on.

The team has already promised additional levels and cosmetics with every season and have even added a new round since launch. It’s a real testament to the game, however, that despite many glaring issues, it’s still a highly recommended experience to take part in.