Treyarch has long been considered the golden child when it comes to the Call of Duty franchise, and in years past, that was for good reason. The community preferred the three-lane map style Treyarch games favored, and for what Call of Duty is as an arcade shooter, it isn’t hard to see why.

That said, I think Call of Duty: Black Ops Cold War is going to continue the downward spiral we saw start with Black Ops 4, and here’s why.

I don’t know how to put this, so I’ll just lead with it. Cold War feels way too much like Black Ops 4, and that’s a bad thing.

I don’t really know anyone who spent a lot of time in Black Ops 4’s multiplayer, but I played enough of it to get a solid feel for the game, and I have to say, this feels entirely too similar. The guns lack any sort of power and sound as computer-generated as they are. While this weekend’s beta saw improvements in that regard, coming from Modern Warfare (2019) it’s such a difference that it’s like playing Fortnite after spending six months playing exclusively PUBG.

Weapon balance is still all over the place, with snipers and SMGs dominating every map and game mode. While snipers are more or less balanced on the smaller maps of the regular multiplayer, on the Combined Arms mode, they’re so rampant that using anything but a sniper is a death wish. SMGs have no downside however, with the MP5 and Milano both outclassing any other available weapon, although I’d wager the MP5 is more dominant, with its faster fire rate and lower base recoil.

The assault rifles fair a bit better than their kin in the other weapon classes, but that’s like comparing Nerf guns to airsoft rifles; there’s a difference, but compared to SMGs and snipers, you’re still at a massive disadvantage. The Krig 6 and XM4 are the standouts here, mostly because the open beta has been running for about a day, but also because they’re solid weapons. They’re still outclassed outside of mid-range gunfights, but in a 1v1 scenario you at least stand a chance. 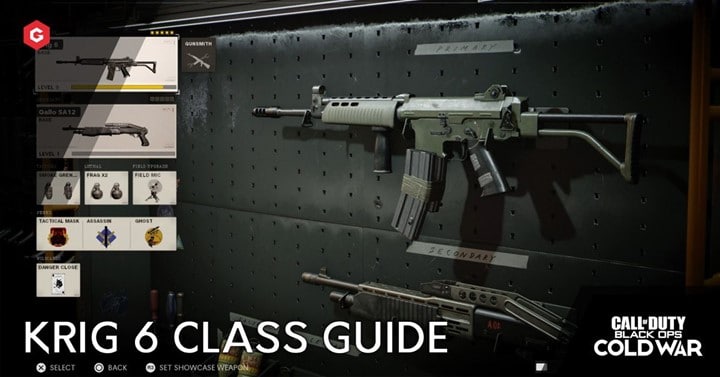 Movement is probably where Treyarch shines the most, but losing the speed bonus of tactical sprint is a bit jarring, especially after a year of having it. Sliding and climbing are where the issues start to arise, and where I can’t help but feel like Cold War is more of a Black Ops 4 reskin than anything else.

Sliding is fast in this game, and coming from Modern Warfare it’s a noticeable difference. There, your slide feels like a natural speed and length, while in Cold War it feels too fast and like you can slide too far. I know Black Ops 4 didn’t have the enhanced movement of its predecessors, but that faster slide stuck around and it doesn’t feel right in a more realistic title. Sliding also forces your character into a crouch, meaning you can’t run, slide, and start running again. The only way I found to combat that auto-crouch was to jump at the end of your slide, which luckily prevents the crouching.

Climbing is perhaps the most noticeable carry-over from Black Ops 4, in that you can not only climb really high, but it’s also incredibly inconsistent from minute to minute. In Black Ops 4, being able to climb a wall two feet taller than my character made sense. Enhanced movement, and all that. But in Cold War, seeing your character easily mantle a wall that high is jarring.

Most notably, with the exception of Ninja, none of the perks in the game feel like a particularly necessary choice, with each one enhancing one facet or another of your play. Paranoia could be the most generally useful, but it got me killed more often than not. Rather than immediately highlighting your screen in the direction you’re being targeted from, it starts with a low whisper that grows in volume before adding the highlight.

The problem with this is that more often than not, you’re dead before it matters, so Paranoia is less useful than you’d expect.

The one thing that is almost necessary however is the Stim tactical. Unlocked at level 6, you’re going to feel its absence. Being able to instantly heal after a gunfight is a massive advantage, especially with how slow health regeneration is otherwise.

When it comes to game modes, the core playlist is what you’d expect, although it’s glaringly obvious that some maps were designed with specific game modes in mind. Satellite and Miami play best in objective game modes to keep players from sitting still, while Moscow’s smaller, more indoor map is best for modes like TDM and Kill Confirmed.

Combined Arms is where I think things go wrong, at least on the Crossroads map. To be completely honest, it’s bordering on unplayable on this map due to a huge array of issues. Rather than being placed into squads, players are dumped onto teams and spawned near one of their team’s captured points at random, meaning you could be spawned at the farthest point from the action.

Vehicles in theory help with this, but spawn so infrequently that they’re basically useless after the first 15 seconds. The game I played saw my team trapped on our spawn almost immediately after the first couple of minutes, pinned there by the two enemy tanks, three or four snipers, and roaming players with SMGs to clean up anyone who got past the rest. Killstreaks ensured we stayed there, and the enemy team won the easiest victory of their lives.

I didn’t get a chance to try Combined Arms: Assault as my first taste of the mode with Domination has ensured I won’t be going near it again any time soon.

The game’s technical state, even for a beta, is pretty solid. The beta only crashed on me once in the three or so hours I played last night, which is pretty good considering the sheer number of players connecting. I expect it might be worse today, as yesterday was an early access open beta for anyone who pre-ordered the game.

I only saw one instance of a graphical bug on Satellite, where as the game was loading all the textures went hazy and stretched, like watching a video at 240p with massive amounts of screen tearing. That resolved itself as soon as the match started however.

The menu experience is much smoother, something I expect everyone will be glad for. Modern Warfare had an ambitious live menu, with the player character actively walking around. While it looks great, the impact it has on the menu is undeniable, and I often find myself wishing I could turn it off just to be able to access my loadout or season pass screen faster.

The game also boasts cross-play which can be disabled if you want, at the penalty of longer queue times. For console players, I’d suggest turning this off as soon as you open the game. Cross-play in theory is fine, but the sheer advantage PC players have with a high FOV and keyboard and mouse mean that you’ll often get demolished due to the higher degree of control they have.

Black Ops Cold War is too similar to Black Ops 4 for me to really suggest that you pick it up for the multiplayer. Yes, this is a beta, and yes, most of these issues will probably seem some sort of balancing in the future, especially after release, but the game just doesn’t feel right to me.

Maybe that’s because Treyarch only had two years to develop this, while Infinity Ward had three for Modern Warfare, but whatever the reason, this feels too much like Treyarch’s last game for me to recommend it.

I’ll give Cold War’s multiplayer a chance after release, especially for my review, but unless there are some significant changes, I don’t see myself spending much time in the multiplayer. Hopefully the zombies is at least worth having, as the campaign will probably be the average four or five hours of play. Whatever the case may end up being, I’ll have a review out the day after Cold War’s release, so keep an eye out for that.