Yet Another Delay For Cyberpunk 2077

You hate to see it. Cyberpunk 2077 faces yet another delay according to a recent Twitter update. Developer CD Projekt Red revealed their decision to push the date back for a fourth time, seeing the game released on Dec. 10. The studio had only recently announced going “gold” indicating a finished physical product.

Though this newest delay is rather short– coming in at 21 days– the studio plans to take this time to ensure that the game runs smoothly across all nine versions and the two newest console generations. 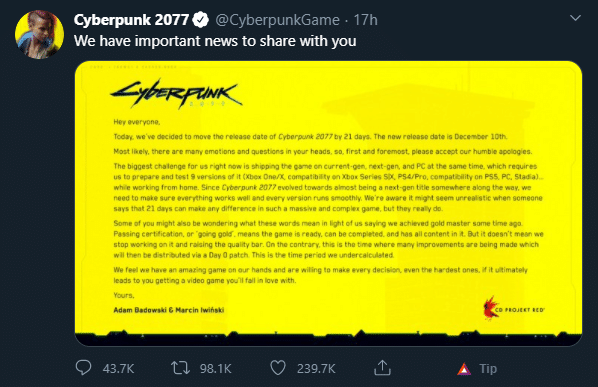 The  last paragraph of the letter, issued by the studio head, reads “We feel we have an amazing game on our hands and are willing to make every decision, even the hardest ones, if it ultimately leads to you getting a video game you’ll fall in love with.”

Cyberpunk 2077 was originally set to be released on April 16 of 2020. Complications no doubt arose with the interference of the COVID19 pandemic forcing everyone on lockdown and shuffling up the development end. It was then further pushed back to September 17, and then subsequently to November 19 as its most recent launch date. Now the official release has been set for December 10, CD Projekt Red citing that the extra three weeks will give them more time to work out any kinks the game might face on supported platforms.

Based on the history of the game’s development, Cyberpunk 2077 enthusiasts should not be too disgruntled as they’re likely used to this kind of disappointment by now. It’s better to look on the bright side of things and know that the game will be ready when it’s ready.

Afterall, there’s still plenty to be excited about when it comes to the game even before it’s been released. Plenty of news on what to expect once players can get their hands on it like the latest Night City Wire event that went into a deep dive on how Cyberpunk 2077 vehicles will work in game. There has also been a confirmation that Keanu Reeves’ own motorcycle company made a special edition ride that will be available in the game.

More of a two wheels fan? No worries, we got you covered! Go behind the scenes of our cooperation with Arch Motorcycle with the company's co-founders, Keanu Reeves and Gard Hollinger. pic.twitter.com/SrHVKRkhsy

As we wait for the next official announcement from CD Projekt Red, we’ve already been privy to a few details. We already know the game will be shorter than The Witcher 3 in both main story as well as map size. Though the map of Night City is said to be incredibly dense meaning much more to do in a smaller space. It may also be a good idea to go over the system requirements for the game if you’re one of the many who pre ordered for PC.