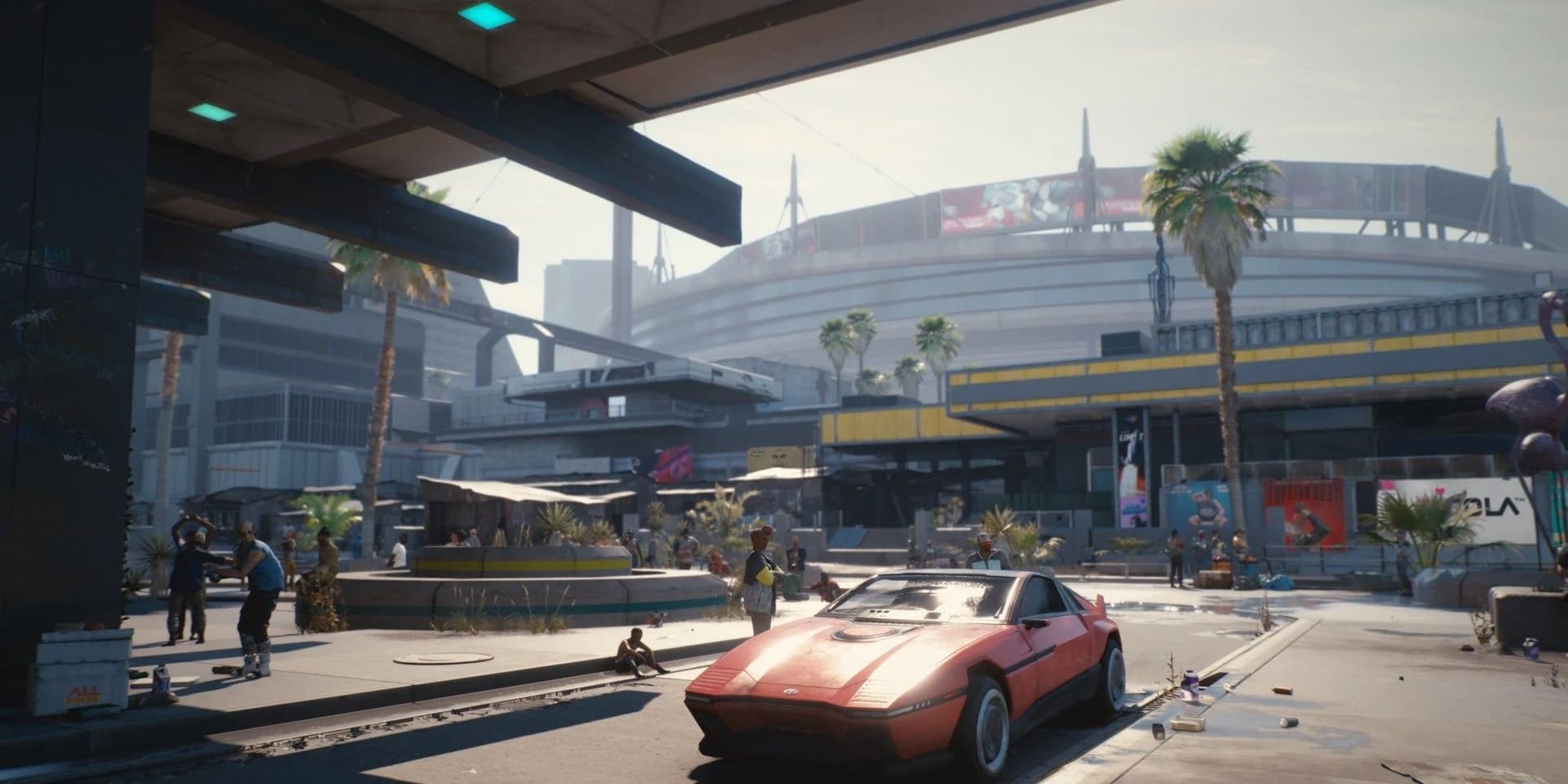 Weapons are abundant in Cyberpunk 2077. You’ll earn them through mercenary jobs, purchase them from stores, or loot them from the corpses of your enemies. Then there are other more interesting and special weapons you can find hidden throughout Night City. These weapons are considered “Iconic” and come with unique properties that make them far better than your standard arms.

These weapons can be easy to miss, especially if you’re not even looking for them. Thankfully, we’ve done the heavy-lifting for you and have provided all of the locations for each Iconic weapon in the game. We’ve divided them by weapon type: Tech, Power, and Melee. 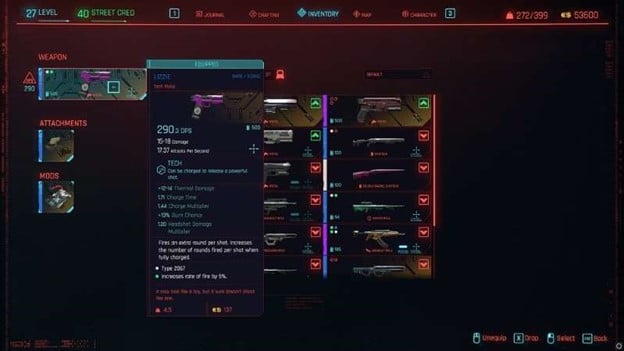 You can acquire Lizzie in Judy’s Den, once you return to Lizzie’s Bar in Act 2 before completing the Automatic Love mission. Lizzie will shred through enemies very quickly as it pops off loads of rounds in a short timeframe that deal Thermal damage. The Thermal damage gives each secondary round fired a chance to inflict Burn damage on the target.

Like all tech guns, players can charge up the pistol and unleash a volley of rounds into their foes. There’s something truly satisfying, and slightly morbid about watching multiple enemies burn up before your eyes. 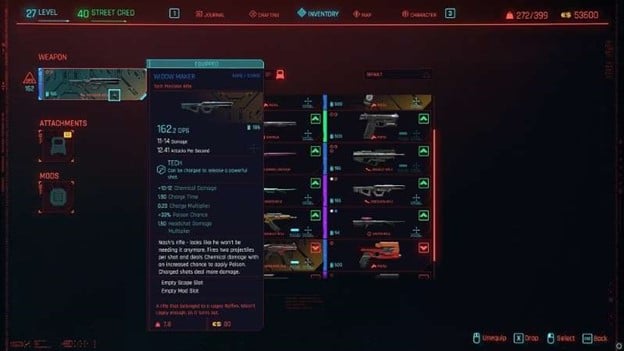 You can collect Widow Maker during the Ghost Town story mission, on Nash in the Raffen Scav hideout. With this nasty tech rifle, you’ll be able to point, aim, and shoot through walls and cover with, not one, but two rounds. Like all other tech rifles, you can charge up your shot and blast the baddies hiding behind cover, only this time with a quick and easy double tap.

The Chemical damage it pumps out has a chance to poison enemies, so newbie snipers won’t feel so bad about missing headshots. 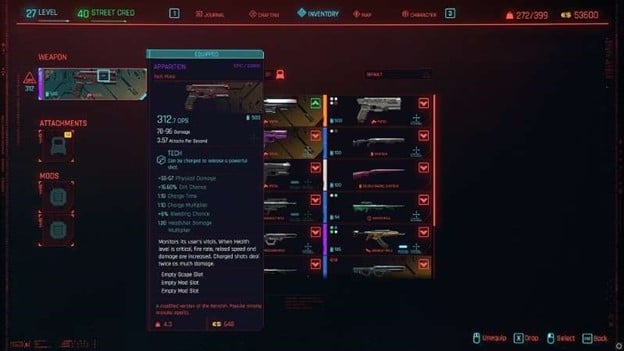 This particular weapon seems exclusive to those who’ve chosen the Corpo path. You can loot it off a corpse after completing the Warpigs side job. Apparition is the only Iconic tech pistol that we know of and shows up late in the game. It deals some serious physical damage and will gain boosts depending on your life total.

The lower your health, the stronger the boons it provides. These tend to be faster reload and firing speeds, as well as additional damage, which when charged, will deal out double. 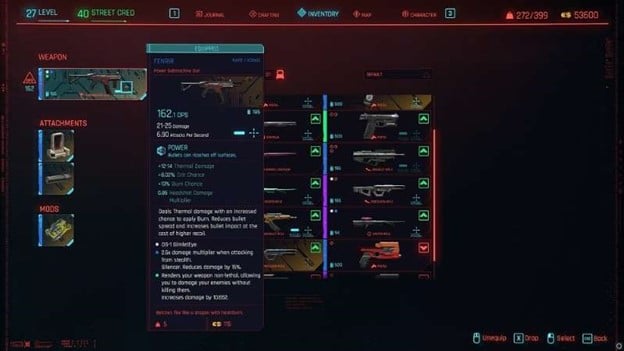 Like the mythical norse beast upon devouring the sun, this Fenrir also has jaws of fire. This weapon deals Thermal damage and has a higher chance than most to set people on fire and apply Burn.

It can be found near the monk in the warehouse during the Sacrum Profanum side job. This is one of the earlier Iconic weapons you can find and it is one extremely useful sub-machine gun to get you through Act 1. 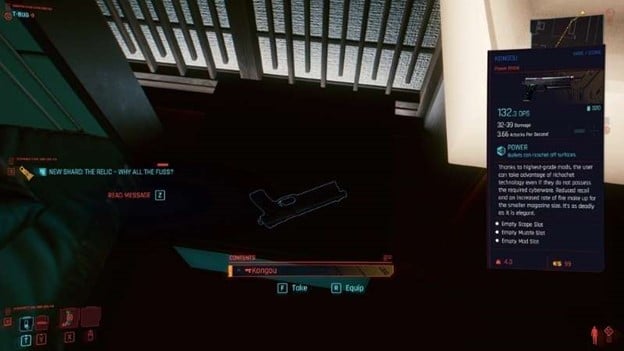 Kongou is a Power pistol that can be found on a nightstand in Yorinobu’s penthouse during The Heist in the first act. For anyone who has dreamed about bouncing bullets off of surfaces and hitting your mark like Bullseye from Marvel Comics, Kongou is a dream come true.

Standard Power pistols are also capable of this but tend to need specific cyberware to pull it off. Kongou does away with that requirement and allows you to get into bullet ricochet right away. 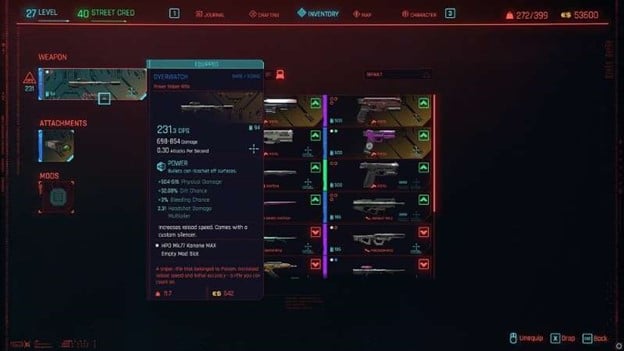 Completing the Riders on the Storm side job during Panam’s story arc will reward you with the best sniper rifle in the game. Overwatch comes with its own custom silencer, massive base damage, and a pretty high possibility to deal critical damage, headshot or not.

This weapon is a must for any players who prefer the safety of distance and still pump out loads of damage to multiple foes. 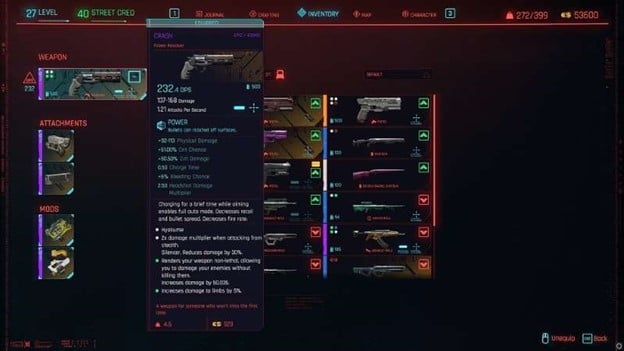 The Dirty Harry special of the future, Crash isn’t your grandaddy’s revolver. This piece does massive damage, has a high critical hit chance, and can be used in a fully-automatic capacity when looking down the sights. It’s a highly-versatile reward for completing River’s story arc. You can begin working on it from the side job I Fought The Law. 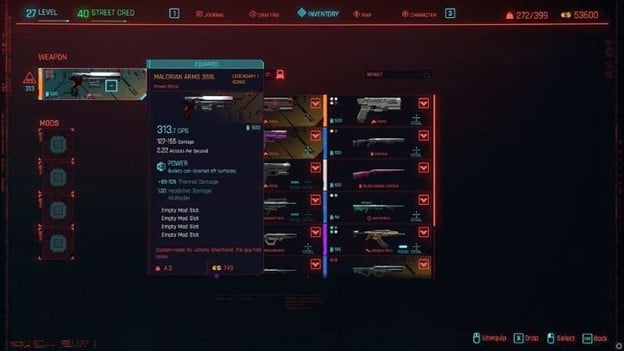 This gun belonged to Keanu Reeves look alike, Johnny Silverhand. A few times throughout the main story, your character will get their hands on it in a limited capacity. It’s not until later in the story can you retrieve it from Grayson during the Chippin’ In side job.

Malorian Arms 3516 is ridiculously powerful as is, with extra Thermal damage and a fast reload time.The 4 mod slots it comes with can be used to turn it into a powerhouse. 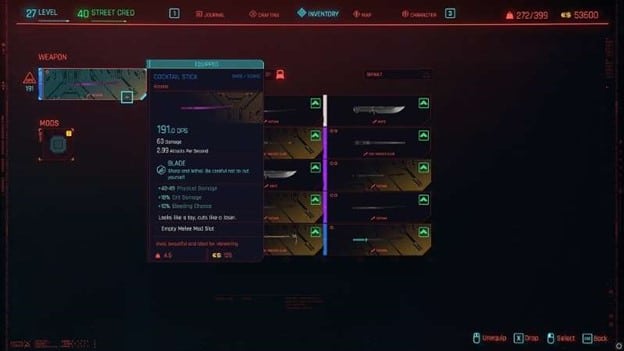 “Lopping heads off with style” is the only description to give once this hot pink katana is in your character’s hands. You can find it early in Act 2 in the Clouds VIP area during the Automatic Love mission. You’ll want to dip into the dressing room before making your way to Woodman to collect it.

Aside from the color, the blade’s only notable perks are that it inflicts bleeds and has a decent chance of causing critical hits. 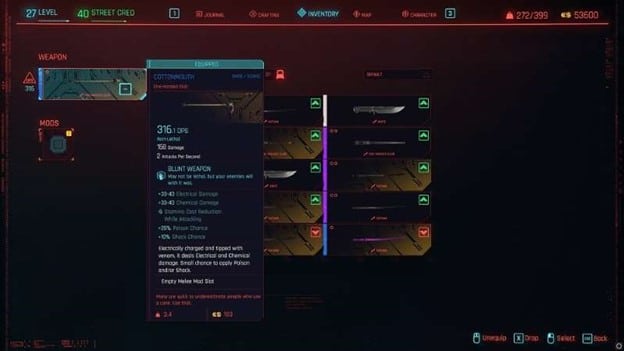 Found on Finger’s bed during the Disasterpiece mission, Cottonmouth is an interesting weapon to say the least. It can Poison and Shock enemies on top of dishing out some decent damage. Regardless of the poison potential, Cottonmouth is actually considered a non-lethal weapon. This makes the club rather unique and especially useful to players looking for a non-lethal playthrough. 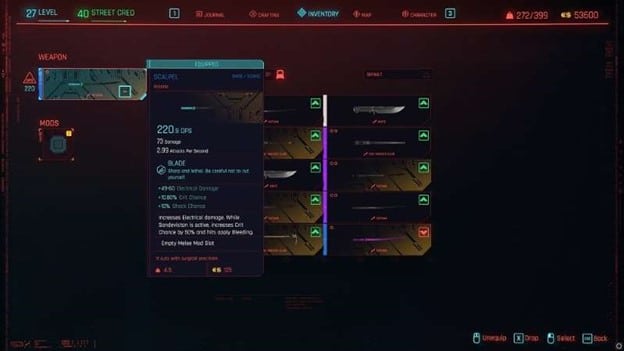 Rewarded for completing the Big In Japan side job, the oddly named “Scalpel” is a fun sword where each swing is packed with Electrical damage. When paired with the Sandevistan cyberware, it’s already decently high chance to critically strike foes gets a large bump by 50% on top of added Bleeding damage. Definitely a weapon you can have a lot of fun with throughout all missions in Night City. 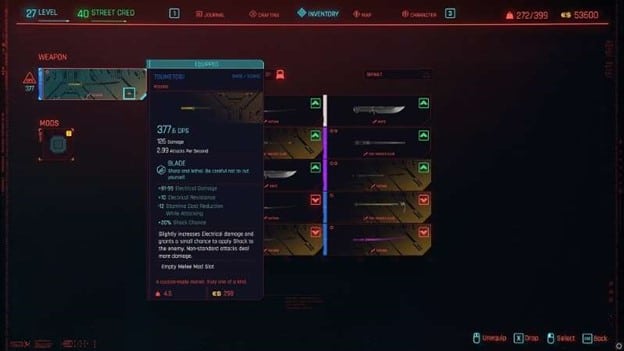 Yet another sword on the list and is actually quite similar to the aforementioned Scalpel. Tsumetogi deals Electrical damage and can potentially Shock enemies that you slice through. What makes it stand apart is that the Stamina used to swing it is cut in half when compared to other Katanas the damage of your non-standard attacks is higher. You will also receive a little bit of Electrical damage resistance while wielding it.

You can get the Tsumetogi as a part of Judy’s story arc. If you’ve already done the Pisces side job, the area will be familiar to you. During that side job, you had to talk to some Tyger Claws bosses. Tsumetogi can be found on the table in that area. 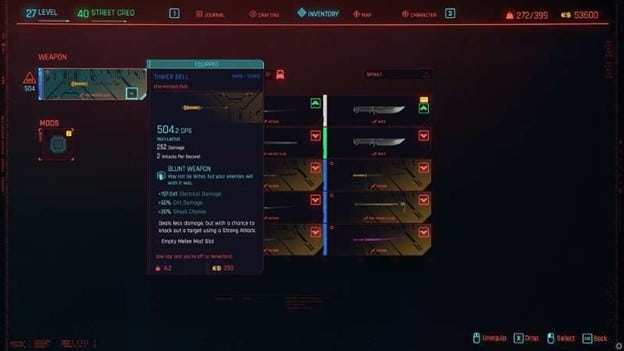 Acquiring this weapon is only available during The Hunt side job in River’s story arc. You’ll have to locate and flip the switch in Peter Pan’s bedroom, within his farmhouse. The switch will reveal a hidden room where you can acquire Tinkerbell.

Like most of the melee weapons on this list, Tinkerbell deals massive Electrical damage with the chance to shock foes. Critical attack chances are also pretty high. The cool thing about the weapon is using a strong attack (holding down the attack button) has a chance to knock out an enemy in a single blow.