New Update Fixes Seizure Issues Among Other Things In Cyberpunk 2077

Over the weekend, Cyberpunk 2077 developer CD Projekt Red dropped a new update for PC, PlayStation 4, and PlayStation 5. The update addressed quite a few of the more game breaking bugs and other issues that the day one patch neglected to fix. Cyberpunk 2077’s quest system was also fixed in the most recent update 1.04.

The patch was announced via a tweet from CD Projekt Red, stating “New hotfix to #Cyberpunk2077 is now live on PlayStation consoles and PC. For Xbox systems, we are working to have the update out as soon as possible.”

Since its release, Cyberpunk 2077 has been plagued by issues, including an unwelcome peep show (character’s genitals being seen through clothing) and stabilization problems. Unfortunately, the protruding penises have not yet received a fix but the stabilization issues, though not shown in the patch notes, have seemed to have been smoothed over.

Other fixes included in the update have reduced vehicle appearance pop-in, the weapon preview during crafting, cinematic animation issues, and adding a toggle to remove copyrighted music which was not working as intended at launch.

A very large concern over seizure triggering flashes has forced CD Projekt Red to modify the “flashing effect on braindances to reduce the risk of inducing epileptic symptoms. The effect has been smoothed out and the flashes reduced in frequency and magnitude.”

Quests in Cyberpunk 2077 will continue being tweaked and optimized in order to ensure players can either complete or re-track them. The following are the patch notes for update 1.04.

Update 1.04, as of yesterday, has also gone out to Xbox consoles.

CD Projekt Red has issued a formal apology for how the game has been at launch and beyond, promising to continue to fix issues as soon as possible. They’re also giving refunds to dissatisfied customers who don’t feel the game has lived up to their expectations. 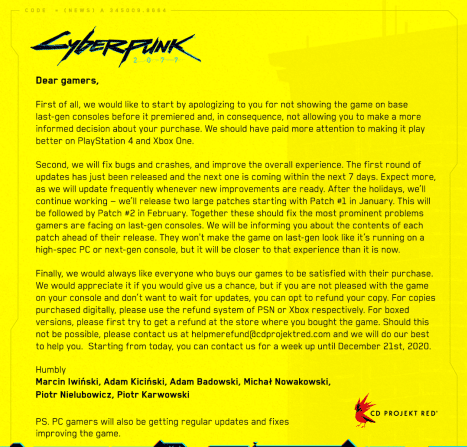