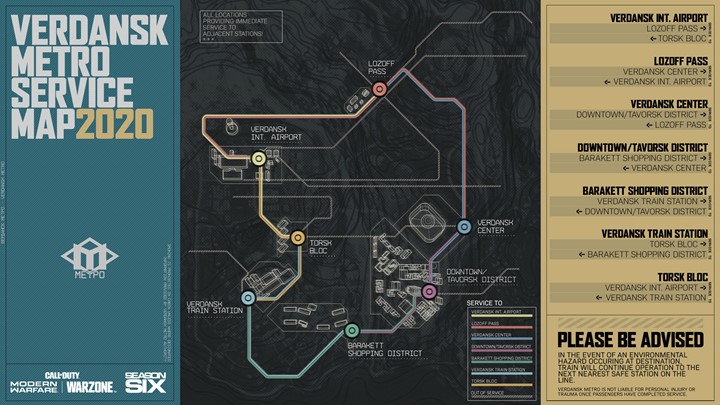 Call of Duty: Warzone is adding a train service

Infinity Ward added a loot train like the one found in Apex Legends and now they’re taking it one step further. Warzone is getting a functioning train that has one purpose: get you and your squadmates from one side of the map to the other quickly, stopping at specific stations you can loot before moving on to the next one, traveling either clockwise or counterclockwise.

The information came from a blog post on the Call of Duty website earlier today, giving us another peek into what’s coming in Season 6. Besides the new operators Farah and Nikolai, and the usual new content from a new season, the Verdansk Subway System (or the Metro) is being added to Warzone.

The system has seven stops, spread out far enough from each other to make it worth using but no so far that chasing someone who got on a train is impossible. The train also has a number of features that make it separate from the one in Apex Legends.

The blog post mentions that “the Metro will have a number of open stations to explore” and while it isn’t clear if all of them will be open from the drop or random ones that will change each time you drop into a new game, the stations are filled with loot, Supply Boxes, and Contracts. The stations will have the same layout, and while they’re fairly large, close-quarters weapons like SMG’s and shotguns are going to reign king if you plan on staying inside or close to the stations themselves.

The train itself has one defining feature that makes it vastly different from anything we’ve seen in a battle royale to date: it won’t move if there’s any fighting on the train or between the train and the platform. This means the train is a safe haven like we haven’t seen before in the genre, and can shake up the Warzone gameplay loop very quickly. Warzone has increasingly been about hunting for teams to stay stocked on ammo and armor plates while hunting for the elusive high-kill game, but the train could give less aggressive teams a chance to outmaneuver their opponents.

Hopping on the train with another team hot on your heels won’t mean a free getaway, especially if they can keep the train in the station with a few stray shots at it. You’ll still have to fight in situations like this, but depending on how long the timer is before it moves again, you could still escape. Getting to a train without anyone right behind you, on the other hand, means a clean escape to the next station.

Of course, it’s only a clean escape until the next station. We don’t know how fast the train is moving, so moving from one station to the next could be just enough time to swap ammo and armor plates around, or a significant break from the action. At the next station though, the escape ladders scattered across each station means another squad could be waiting to ambush anyone who gets off with grenades and explosives.

When it comes to Warzone though, other players are only half of the equation. The circle plays an important part in the game, and as any Apex Legends veteran can tell you, a moving platform can quickly carry you too deep into the zone to escape. Thankfully, Infinity Ward seem to have thought of this. The train won’t go to any stations that are outside the safe zone, so there’s no need to worry about flying head first into the zone after a firefight with an enemy squad. You’ll be safe, so long as there’s another station inside the circle on either side of the station you just left.

We don’t know what the Metro will look like or it’s exact impact on the minute-to-minute play of Warzone, but it’s safe to say Warzone won’t be the same moving forward. A moving safe haven that can take careful players from one side of the map to the other could mean the end of mad dashes for the circle through open fields (I’m looking at you, Airfield. I’ve died there more times than I care to count) while also limiting the frustration of finding a vehicle only to get sniped or blown to pieces three seconds after hopping in.

The Metro can very easily alter the way the game is played, and in big ways. We won’t know what exactly it will end up looking like, or the effect it will have on the Warzone until the season’s release on the 29th, but that’s only a few days away at this point, and I’m excited to find out for myself.