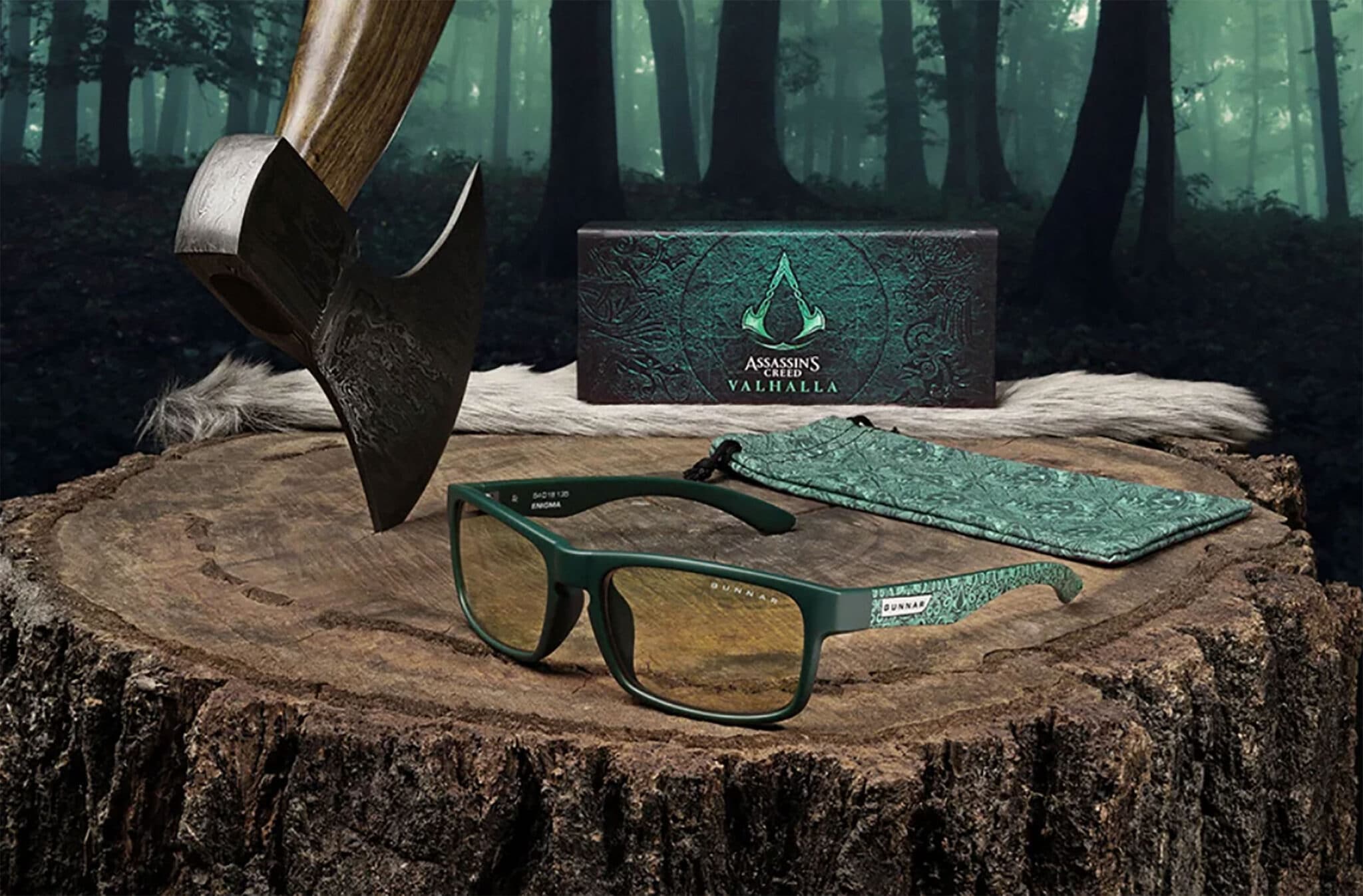 GUNNAR Optiks is joining forces with Ubisoft to release a pair of gaming glasses fit for a Viking warrior. Or, at the very least, for players stepping into the leather shoes of a Viking warrior. Alongside the release of Assassin’s Creed Valhalla, GUNNAR will release Enigma, Assassin’s Creed Valhalla Edition. The officially branded glasses are based on GUNNAR’s most popular style of eyewear, complete with the patented amber lenses capable of blocking 65% of blue light.

NCSA Consumer Products and Licensing VP of GUNNAR, Sarah Buzby, commented on the reveal, stating, “We couldn’t be more excited for the launch of Enigma, Assassin’s Creed Valhalla Edition from GUNNAR.” She continued, “GUNNAR creates superior gaming eyewear, and we’re proud to work closely with them on this launch. We can’t wait for the product to get into fans’ hands.”

“We know Assassin’s Creed fans are a passionate group of gamers and that they will be losing themselves for many many hours exploring and virtually ‘living’ in this incredible Viking world. Our part to play in their experience is simply to be there to help them play for longer, while protecting their eyes,” GUNNAR Optiks’ Director of Marketing Gaming and Brand, Georgina Petrie, said in a press release announcement.

The Assassin’s Creed edition eyewear is built upon the Enigma style with a nylon frame branded with the Valhalla logo. Like other GUNNAR products, the glasses will be smudge-resistant and offer anti-glare for optimal performance. Players will be able to see the world of Valhalla unlike any other with a clarity sure to showcase the beautifully designed environments and character models. Each lens is built in a wide format and set in a sturdy mount with a comfortable nose rest and durable multi-barrel hinges.

GUNNAR Optiks is best known for emphasizing blue light protection with each pair of glasses. The “Blue Light Protection Factor” (BLPF) is intended to grade the overall protection of harmful blue light rays. The Enigma, Assassin’s Creed Valhalla Edition glasses sport BLPF 65, which means the lenses will block 65% of blue light. They’ll also protect the wearers from 100% of UV light. Players can also find the special edition lenses in prescription and a BLPF 90 variety.

With its patented lens technology, GUNNAR offers an enhanced visual focus for close-range viewing and reduces dry eyes over prolonged play sessions. The blue light resistance prevents digital eye strain, which is common among gamers that play for long periods.

Enigma, Assassin’s Creed Valhalla Edition retails for $79.99 and can be found on GUNNAR.com. With each purchase, customers receive a pair of branded glasses along with a glasses pouch with the series’ iconic logo, a cleaning cloth, and flat glasses case.

Assassin’s Creed Valhalla is releasing for the PC, PS4, Stadia, Xbox One, and Xbox Series X/S on Nov. 10, 2020. The PS5 release will accompany the console’s launch on Nov. 12.