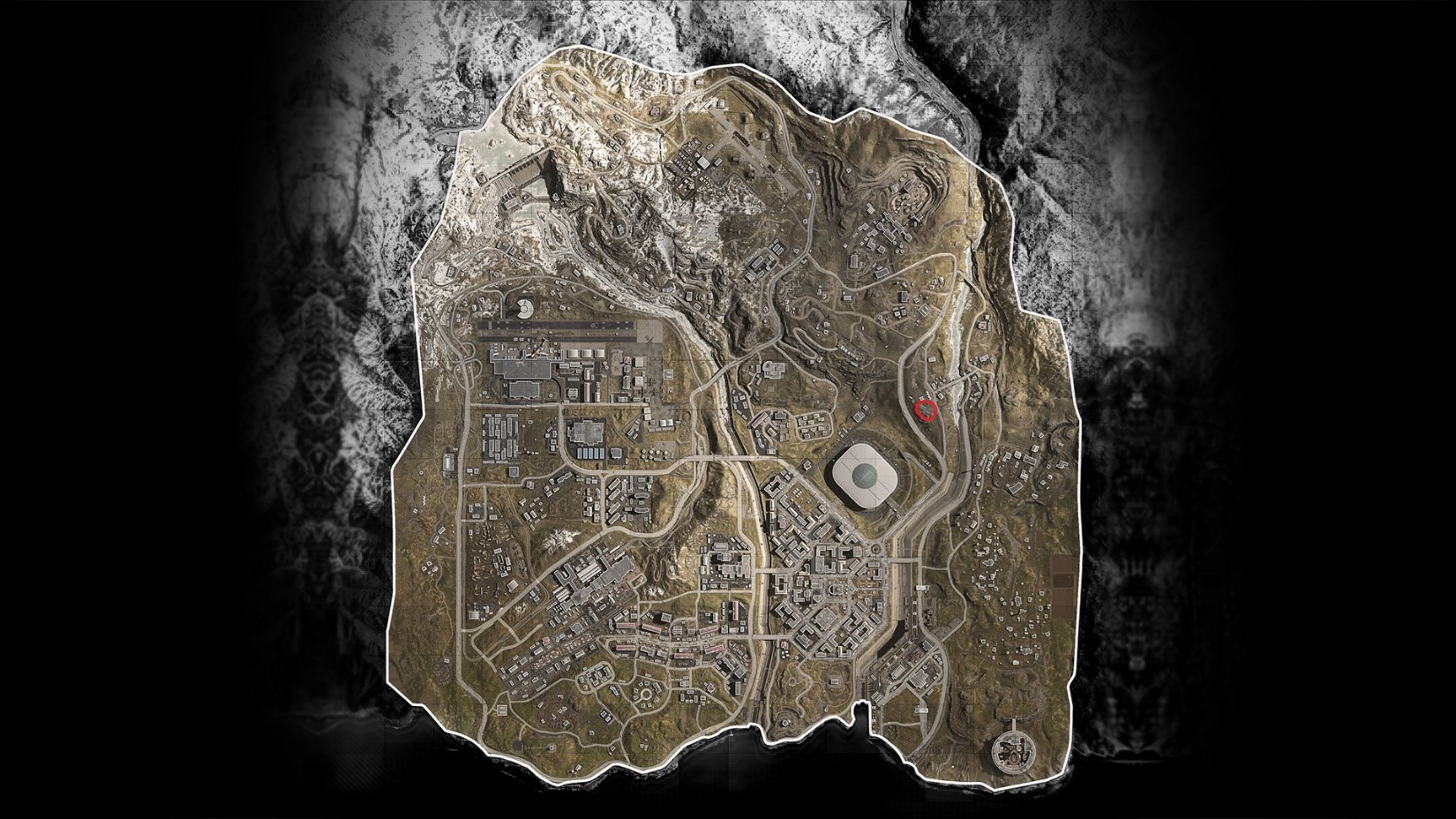 Just a little northeast of the Stadium near a campground spot around about the red circle on the image above, what sounds like demonic screaming or moaning and a child’s laughter can be heard if you wait about four or five seconds. The sound seems to loop, although there is some differentiation, so it isn’t the exact same sound, but the child’s laugh is the main point.

The laugh doesn’t seem to be triggered by anything either. In the two clips posted to Reddit, neither one shows the players doing anything in particular. In one, the player is alone with only a pistol, the game being fairly early, as there’s still over a hundred other players alive. In the other, the player is part of a three-man squad, with non-loadout weapons minutes after the start of the match. While it’s certainly possible this easter egg is only active during the early circles in Warzone, that seems pretty unlikely to me. There’s not really a point in having an easter egg like this, spending the time and resources to code and implement it, only to have it active for maybe ten to fifteen minutes at the start of each match in an area that most players are only barely passing through, if they go near it at all.

This egg seems directly related to the “Haunting of Verdansk” event, almost as a soft teaser or small thing for players to find and latch onto before the event goes live. So far, it’s the only easter egg players have found in Warzone since the update, but Verdansk is a large map with a lot of open space, and the circle (and other players) doesn’t make things easy for easter egg hunters looking to find more. I imagine as times goes on we’ll see similar eggs appear, although nothing more substantial than this until we see another update get pushed through closer to the event’s start.

What exactly the event is is still unknown, but coupled with the other egg found in a Gunfight map, I think those zombie voice lines are definitely meant for the Halloween event, and not a Cold War version of the Warzone map, which is what Cold War’s Warzone iteration is rumored to be.

The easter egg found on the Gunfight map Station is a bit more involved and similar to an easter egg we’d normally see from Treyarch and their zombies mode, and what exactly that suggests has me excited. In a video posted to Reddit here, the easter egg steps are shown, and the egg itself is then activated.

Shooting six different stone decorations reveals five numbers and a keypad. Input the numbers in order from left to right on the keypad (in the video the numbers are 32671, though those could be randomly generated each time the map is loaded, so check for yourself each time) and turn around to the open skybox on the opposite side of the map from the station itself. A giant teddy bear with red eyes will drop out of the sky, kick up a giant dust cloud, and let out a roar before two planes fly in, drop six bombs on it in one run, and then fly off. This seems to “kill” the bear; the eyes go out and it lets out a pained roar before dropping into the ground. I don’t know if this egg is repeatable within one instance, but it’s worth a try.

Why this is exciting is what it suggests. We’ve never really seen this sort of an easter egg in the multiplayer portion of any Call of Duty game, and it could mean we’re finally moving towards the sort of “live story” that games like Fortnite have implemented. While a teddy bear isn’t quite as impressive as a giant mech or live concert, it’s still an impressive step for a franchise that’s more or less minor changes with each new iteration.

Treyarch have been the kings of teddy bears in their games, and those are solely tied to their zombies mode. While it’s possible Infinity Ward collaborated with Treyarch, putting these in as a way to generate hype for the zombies reveal later today, it seems far more likely to me that this was a way for Infinity Ward to hint at what’s coming with the “Haunting of Verdansk” event coming next month. The bear and child’s laugh are reminiscent of what we’d see in a Treyarch game, but they aren’t the same assets. I’ve played every Treyarch game’s zombies iteration, and this wasn’t like anything we’ve seen at any point in those games.

I think Infinity Ward used the fan’s recognition of these tropes as a way to not-so-subtly hint at a coming zombies mode in Modern Warfare, but only time will tell. Treyarch’s new zombies iteration is being revealed live later today, and while I highly doubt they’re changing up the iconic teddy and laugh from previous games, nothing about this iteration of zombies is known, aside from the small tease we received at the end of Cold War’s multiplayer reveal trailer. The teaser seems to suggest a zombies iteration more in line with World War II’s more scary and grounded vision, but only time will tell for sure what this would look like.