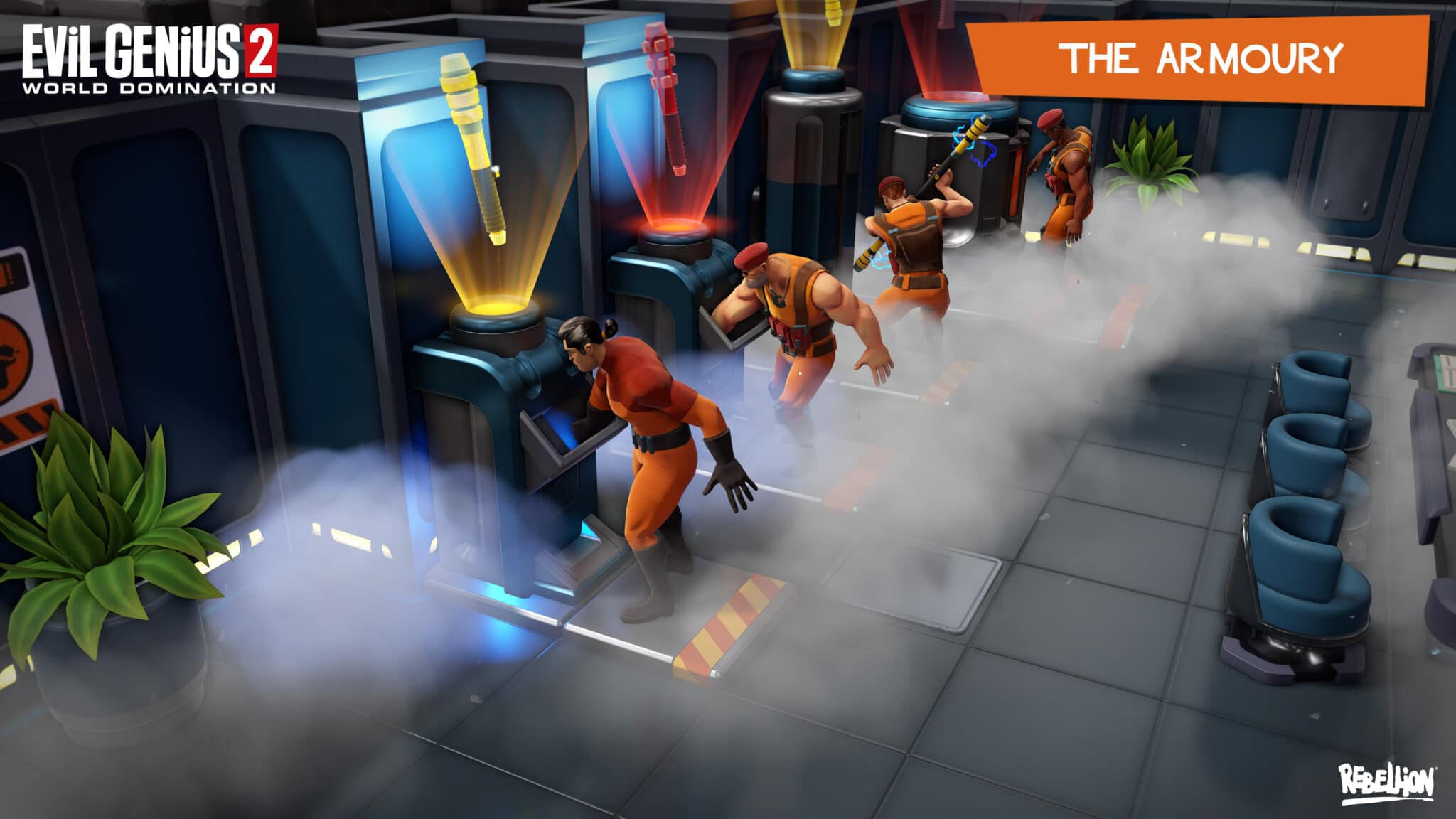 Let’s talk about how you’re going to keep your minions safe, and your plans for World Domination running smoothly. 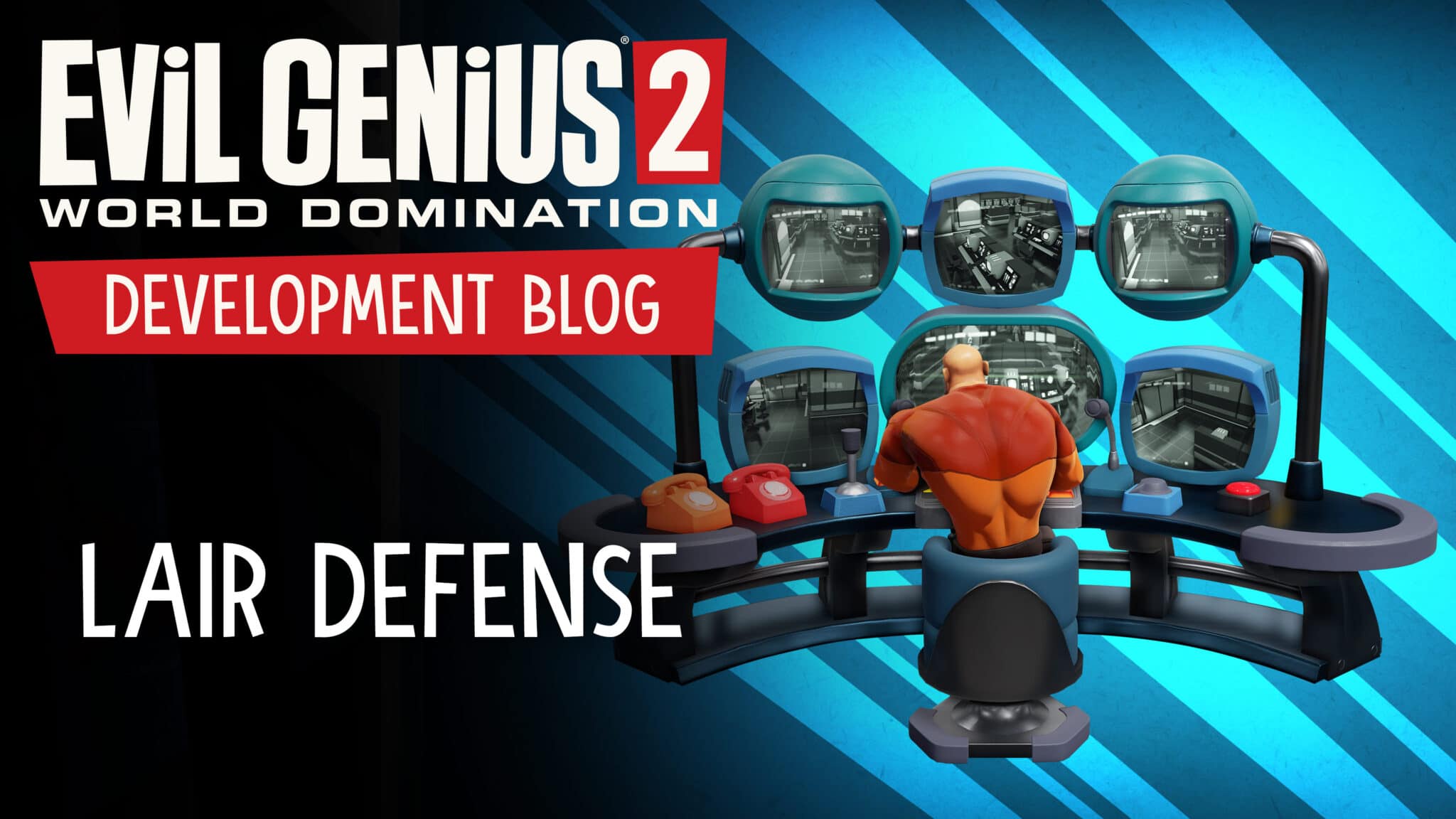 Hey there! It’s me, Lead Designer Rich Edwards. Back again with another Developer Blog post on Evil Genius 2: World Domination. This time, we’re going to be talking about the first lines of defense in your base. We nefarious types call it the Cover Operation, but the public know it as a Casino. 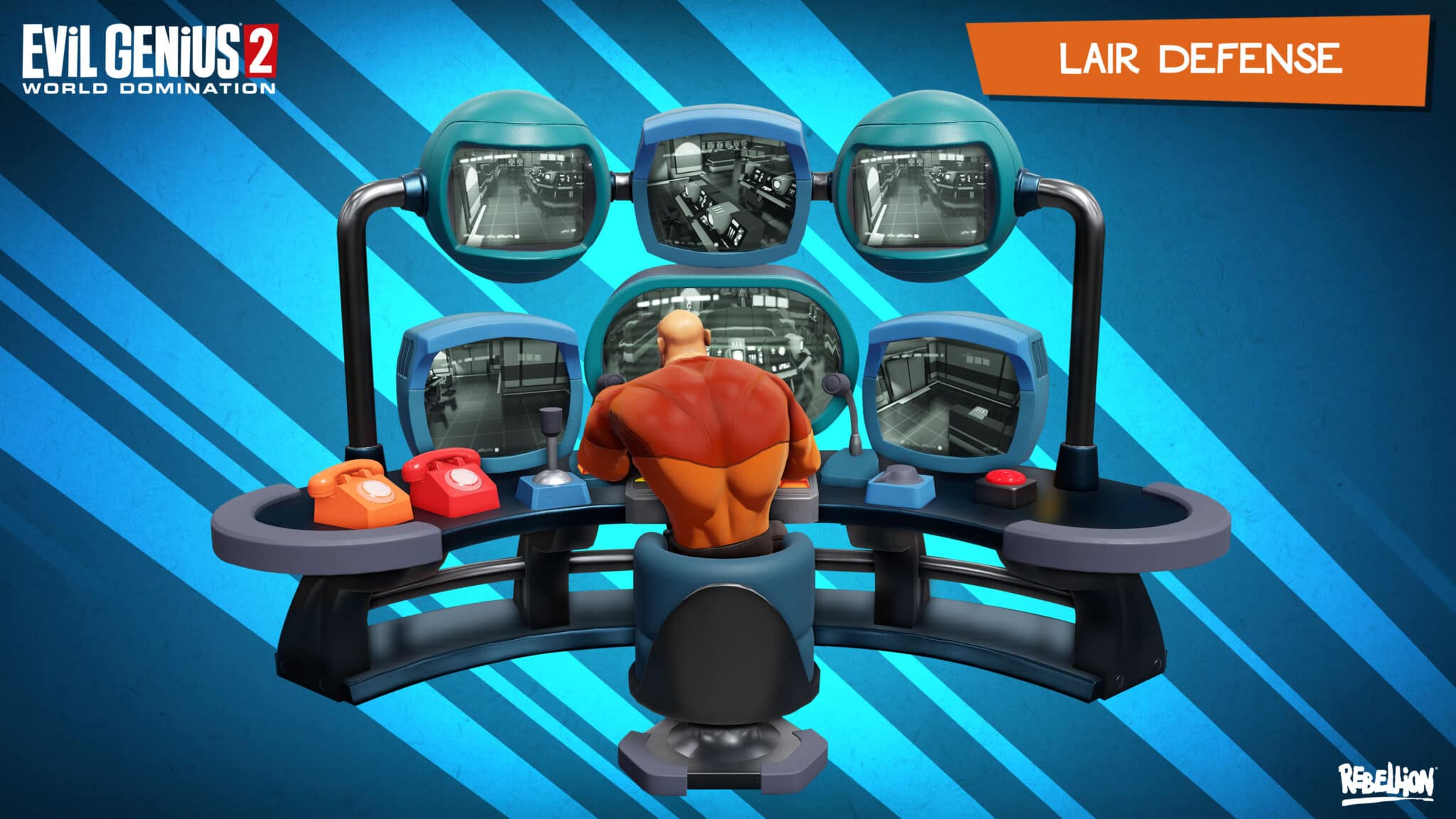 A successful cover operation is the Evil Genius’ front, a means of shifting prying eyes away from their Lair, and in our game this takes the form of a Casino. This is your first line of defense against the Forces of Justice. This doesn’t mean you have to invest heavily in it –  Muscle and Traps are totally fine if you want to go that way – but it will be where most Agents show up for the first time. With a strong Cover Operation, you’ll be able to turn away some Agents before they even enter the Lair by investing in the Deception Tree, which I talked about in my previous blog.

I should note that your Casino isn’t a metagame – we’re not secretly crafting Casino Manager 2021, but you do have some options. You can choose the Furniture you place, who you staff it with, and all these things help to determine how effective it is at turning away enemy Agents. The longer and Agent stays in your Casino, the more you’ll lower their Resolve. If that ever hits zero then, congratulations, you just convinced them that their orders from Headquarters aren’t as important as they once were. Goodbye Agent, we hope you enjoyed your stay.

Of course, a Casino doesn’t just attract enemy agents. No. It also attracts a horde of gullible Tourists who are easily parted from their money. If you’d rather defend your lair with traps, minions and henchmen, then your Casino makes for an effective side hustle.

Speaking of minions and henchmen, let’s talk about how you can make their life easier…

Agent invasions happen. That’s a fact of life, and you’re going to have to accept it sooner or… Well, you can’t accept it later because we’re about to talk about them.

Have you accepted it yet? Hurry up if you haven’t.

It’s how you prepare for that eventuality that is important. Guards patrol your hallways, checking your minions to make sure they aren’t actually an Agent in disguise. However, they could always use a helping hand in this. Initially, this will be up to you as the Genius, but as threats grow, you’ll want to do what every Evil Genius should do and delegate. So, it’s time to start building Cameras and Staging Posts throughout your Lair.

If a threat is detected on your Camera Network – dutifully manned by your minions – then an alert will be sent to the nearest Staging Post. You may have seen screenshots of Guards lounging around with their feet up on an expensive looking table. Believe it or not, these finely honed killing machines are actually waiting for an excuse to spring into action.

The Armoury is home to the largest Staging Posts, as well as the Security Consoles your minions need to monitor your Cameras. But that’s not all you’ll find there.

You’ve seen Guards in your Lair. While they are capable fighters, rippling with muscle, I want to share a secret with you. I think they put too much emphasis on their glamour muscles, and I’ve seen them skip leg day more than once. Higher tier minions are stronger, but even then, why take the chance? Why not give them an array of deadly weapons? After all, no matter how impressive your muscles, you should never take a glute to a gunfight.

And so the final thing that ends up in your Armoury is naturally Weapons. Minions will pick up the weapon they want and carry that with them in order to respond to any intruders. You don’t *need* to build Weapon Racks, but if you don’t your minions are going to try and solve every problem with their fists. While admirable, they will be shot to death relatively quickly. You can grab both lethal and non-lethal weapons, especially useful if you want to capture enemy Agents. There are even Batons available, useful for handing down a pummelling. However you want to deal with your foes, there’s a weapon available for that purpose. You can even skill up your Guards into different classes – the Martial Artist, for example, excels at Hand-To-Hand combat.

Standing In The Way Of Control (Room)

All of this does filter back into the Traits system we talked about previously – and, additionally, how your minions have a series of stats you should pay attention to if you want your Lair to operate to its fullest potential. If your minions have low Smarts, then your security network is going to suffer. They’ll tire out quicker, and they won’t be paying as much attention to their screens. So, you need to make sure your minions are well-rested, well-fed, and prepared to stare at a screen all day, ready to dispatch guards at a moment’s notice. Of course, Traps are also incredibly important to Lair defense, but we’re going to be diving in to those at a later date. Eventually, we want you to free up your headspace to focus on the bigger picture of World Domination. A lair that can take care of itself is a successfully run operation, with the first line of defense being your minions’ ability to spot incoming threats.

Before we close this blog out, let’s flip the script and switch from defense to offence – heading straight over to the Control Room! Your gateway to the world stage, the Control Room is the key to World Domination, a topic we’ll be covering more in the future. However, as a room in the lair, it is incredibly important. As the hub of your global Operations, your Control Room helps you establish and organize your criminal network and Schemes. The bigger your control room, the more minions you have working in it, the more you’re going to be able to exploit the world and enhance your effectiveness. A small control room will be fine for robbing the bank down the road, but if you want to literally steal the riches of a thousand kingdoms in some kind of mega heist, you’re going to need a sizeable Control Room. We’ll be coming back to this room more at a later date, because of its importance to the World Domination mode. You should definitely look forward to that…all in good time. 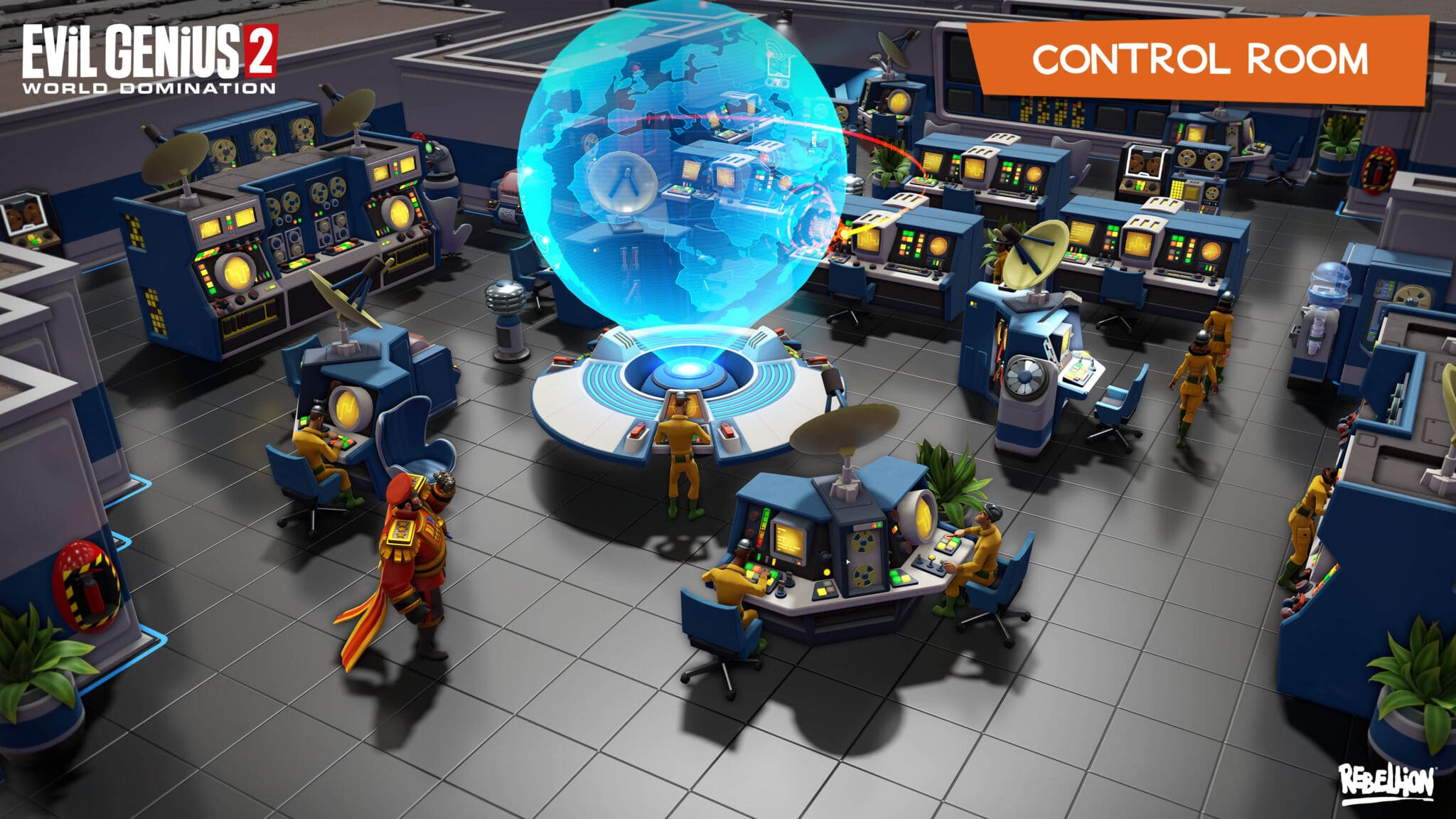 That’s it for another Evil Genius 2 Development Blog! Lair Defense is just one step in your grand plan, but an important one to consider. I can’t wait to see how you all lay out your lairs – there’s bound to be some inventive designs out there! We’ll be back in two weeks with yet more for you, but until then join the Evil Genius 2 Discord Channel for more!