You read that title right. It looks like any hope of the new Call of Duty being smaller than the current one has been thoroughly smashed to pieces.

In a blog post for the Black Ops Cold War PC launch trailer, Activision showed off a chart showing just what this game would take for PC players to run it, and it’s unsurprisingly beefy. 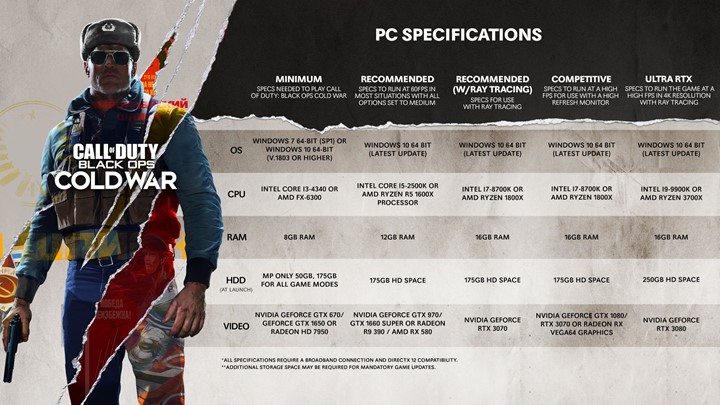 Where things get wonky is the amount of space you need to store the game. Looking at the chart, for just the multiplayer and nothing else, PC players will need 50 GB. While that doesn’t sound like a lot, it’s worth pointing out that games like Fortnite and Apex Legends come in at below half that, at about 25-30 GB. For one part of the game at the lowest settings, you’d need more space than two of the most popular battle royale titles on the market right now.

To play the game at the “recommended” settings, which should get players a relatively stable 60 FPS on medium settings (if everything goes to plan with the game and it isn’t a buggy mess) you’d need at minimum 175 GB to store everything.

If, for some god forsaken reason, you feel the need to play the game at 4K with ray tracing at a “high” FPS, you need an Intel I9-9900K or AMD Ryzen 3700X and RTX 3080. If that sounds crazy, that’s because it is. I can’t imagine this will get a whole lot of use outside of enthusiasts who want to play everything at 4K with ray tracing enabled, but for the average player that much extra stuff going on in the background will just wind up as a distraction if they even notice it at all. Oh, and for this, you’d need 250 GB of space.

Keep in mind that these are estimates for how much space you’ll need just on launch. It’s possible, if not completely likely, that this game will grow in size and bloat to the point it’ll take the same amount of space as Modern Warfare does now. That game launched at 175 GB, and now takes up so much space that it won’t fit on some SSD’s, and many players have uninstalled the game simply to have space for more than one game.

While there’s no guarantee Cold War will grow to the same size, I think we’re seeing the next step in gaming. Games that will look gorgeous and play well, but chew up entire SSD’s like game cartridges from the 80’s and 90’s. It’s a concerning trend, to say the least, and while HDD’s and SSD’s are relatively cheap, they’re by no means affordable, especially with the next console generation all but requiring additional external storage.