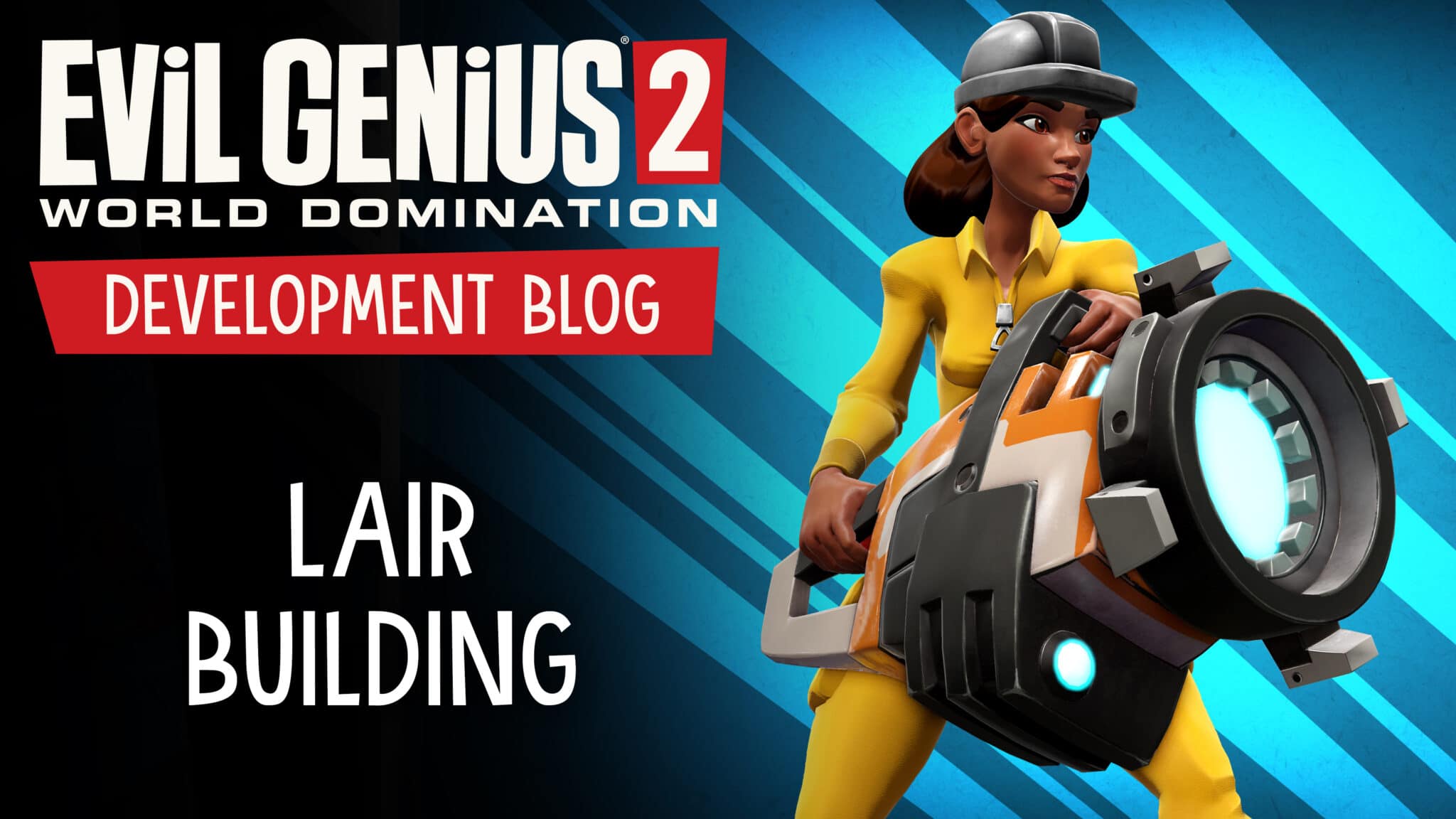 The best criminal masterminds put a lot of thought into their Lair, and we know you’ve been wanting a little more detail about how to put your plans into action, minions…

In today’s Development Blog we’ll be covering Lair Building. The best criminal masterminds put a lot of thought into their Lair and we know this is something you’ve been asking us to divulge more on, so let’s get right to it. 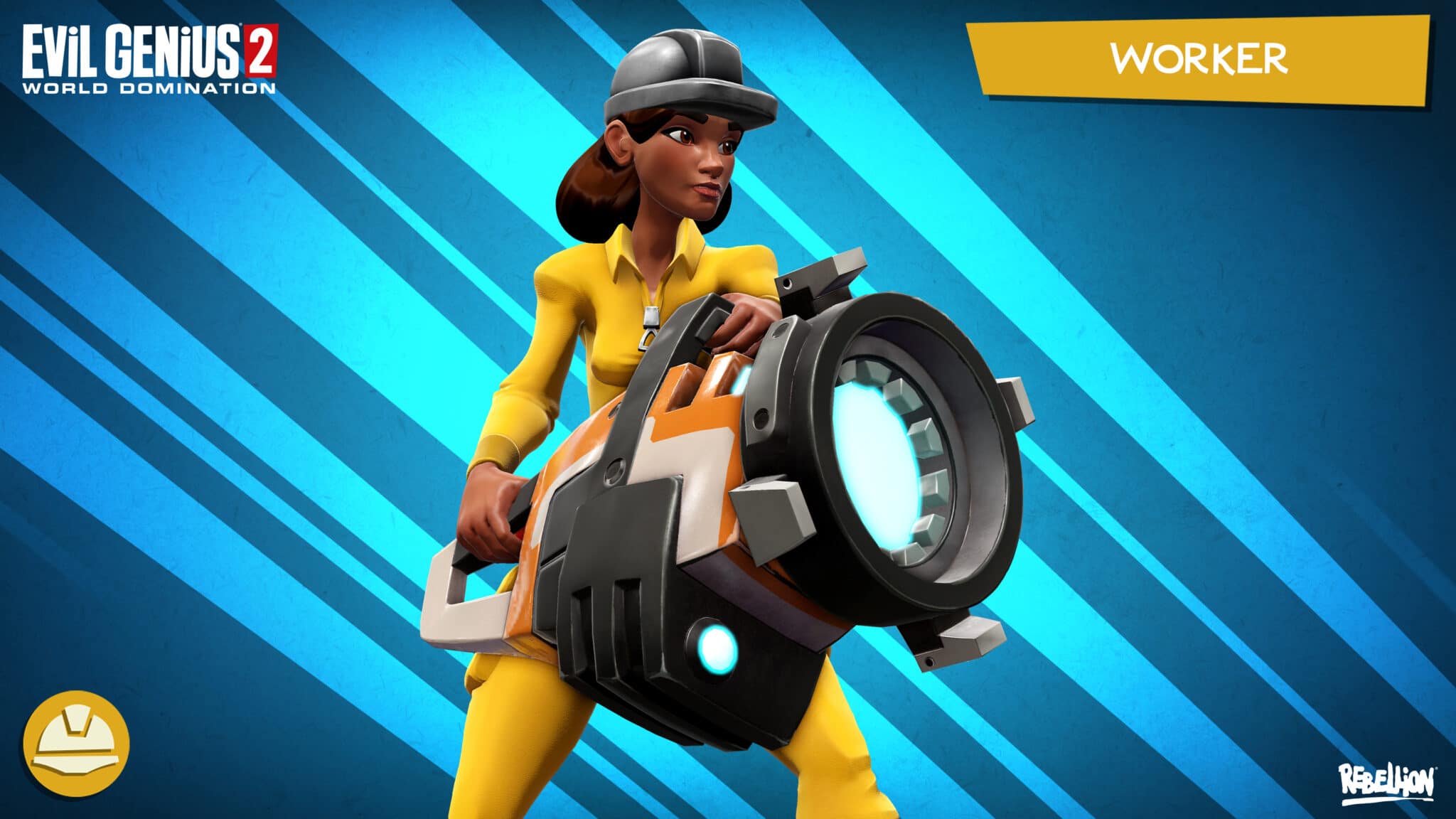 Let’s tackle the elephant-sized-device in the room first. You might have noticed in our trailers that your minions have a fancy new tool they’ve been putting to use. The Lair Builder 5000 is its name, and it is the answer to ‘how do your minions do X?’ The Lair Builder is a state of the art multi-tool, allowing minions to do all manner of things throughout the Lair – from destroying solid rock to putting up new walls, all the way through to constructing equipment and sucking up body bags. It’s a brilliant tool that all minions have access to, and it’s definitely a lot cooler than giving them pick axes and shovels.

I’ve seen a few of you mentioning this online, and wanted to dispel a small misconception about the Lair Builder 5000 – it doesn’t create furniture out of thin air. Your minions will still need to pick equipment up from the depot and carry it into the Lair, but these items are often heavy, and let’s face it, your workers aren’t the strongest people in the world. The Lair builder simply turns the heavy, back-breaking labour into more manageable back-straining labour. When it comes to adding items to your Lair, we’ve kept the flow from the original Evil Genius is still intact, not to worry. We just thought we’d enhance how minions go about their business – and honestly, a spy-fi gadget is far fancier than crates, as is befitting for your stylish underground Lair.

We’re also doing our level best to ensure that the feedback on building is more immediate. If you give an order – say, if you lay down a plan for a brand new Inner Sanctum, complete with impressive boardroom table and chairs you’d literally die for – the minions will immediately start work. As soon as you hit Confirm on your build order, you’ll see a horde of jumpsuits converging on the building site, brandishing their Lair Builders, eager to get to work.

Let’s talk about dynamite briefly. We loved how that felt in the original game, how satisfying it was to watch the ripple of explosions expertly, and improbably, carve a winding tunnel through the mountain. That feeling is still there as your minions tunnel into the bedrock tile by tile. Only now there’s far less waiting around for stacks of explosives to be piled haphazardly against the wall.

Also, there’s an auto-decoration system –if you don’t want to take the time to decorate your Lair, you can relax, safe in the knowledge that each room will look amazing right from the start. A number of decorations will appear on your walls automatically, fitting themselves around any items you’re adding. But this is a Lair Builder at heart, we know you’re going to want to decorate the rooms yourself, so we’ve made sure there’s a whole host of cosmetic items available to you.

The Veins Of The Lair 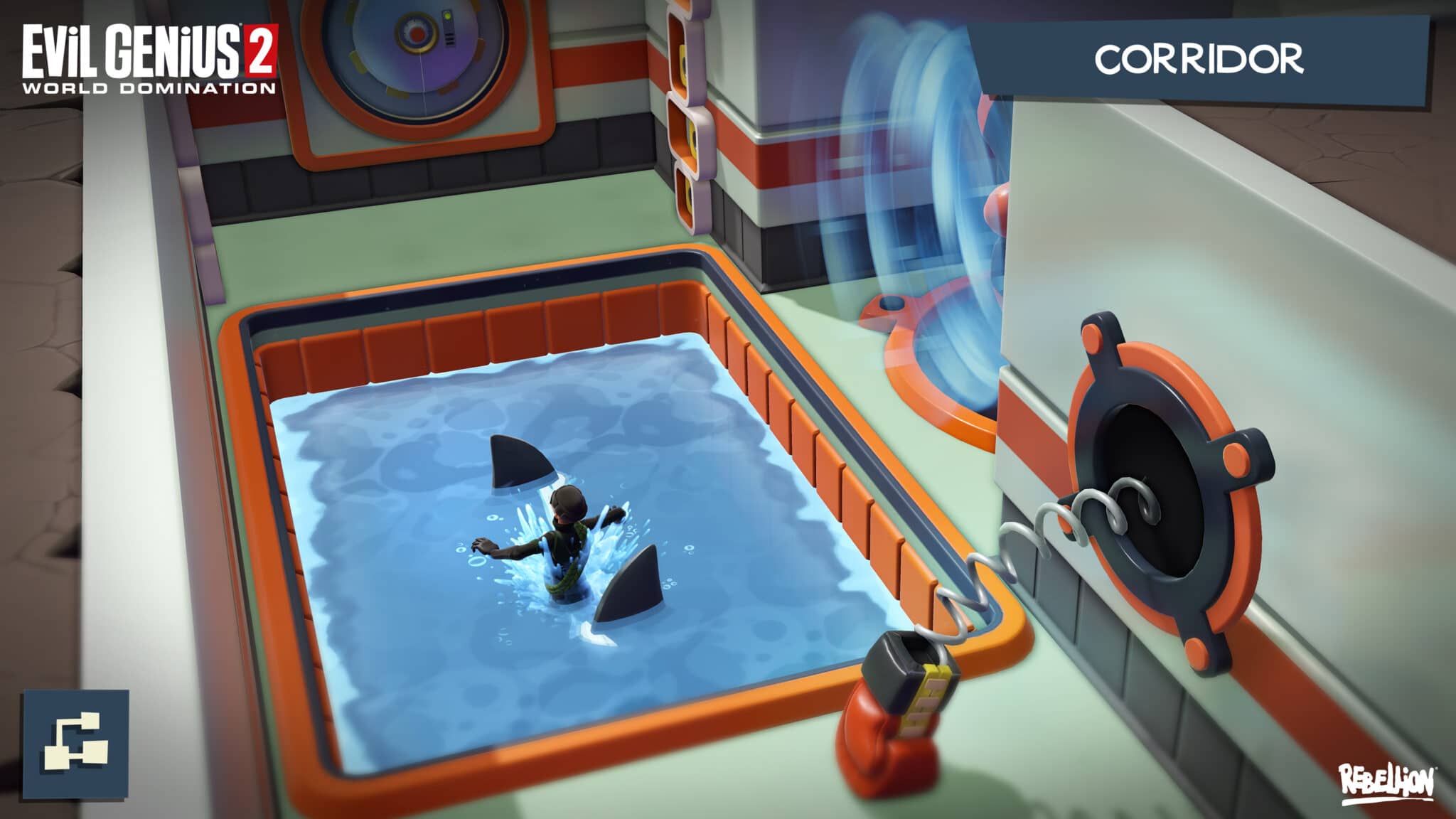 Corridors. Who doesn’t love corridors? The endless stretches of safety lights, the quiet humming of generators. The distant sound of squeaking rubber soles.

And that’s before we even mention the total lack of hiding places for Agents or the concealed death traps built into the walls and floors.

Corridors make the ideal home for your Trap Networks. We experimented early on with having them in multiple rooms, but it turns out that minions find it hard to sleep next to saw blades, guards kept falling into the shark tanks, and let’s not even mention the time Eli got too close to a flamethrower. So, we decided to adhere to some form of health and safety in our Lair constructions.

They’re also great places for gunfights – with great line of sights. Think of the corridor as the veins connecting your Lair, allowing you to spot undesirables with relative ease. Minions don’t hang around in corridors…so that could be an Agent in disguise.

For their unassuming nature, corridors might just be the most important area in the Lair. Making sure that minions can get where they need to go quickly, while ensuring any Agents who break through your security get lost in the maze is just one of the many aspects you’re going to need to account for when you’re building your Lair.

Or you could even remove corridors entirely. If you want to connect your barracks straight to a Mess Hall be our guest. You are the Genius, after all.

There’s also doors to consider. Yes, doors. The indefatigable Forces of Justice have many tricks up their sleeve, but each of their Agents struggles with certain doors. I’m not going to reveal all the combinations here, but…it’s worth considering the types of agent you’re going to come up against, and trying to beat them at their own game. A Rogue might get past a simple door’s security with ease, but a high tech laser grid? That’s trickier.

You might have also noticed that your Lair now has multiple floors…the possibilities for crafting your dream Lair truly are endless, but watch out for the Forces Of Justice attacking on multiple fronts. You’ll have to make sure all your floors are properly defended. 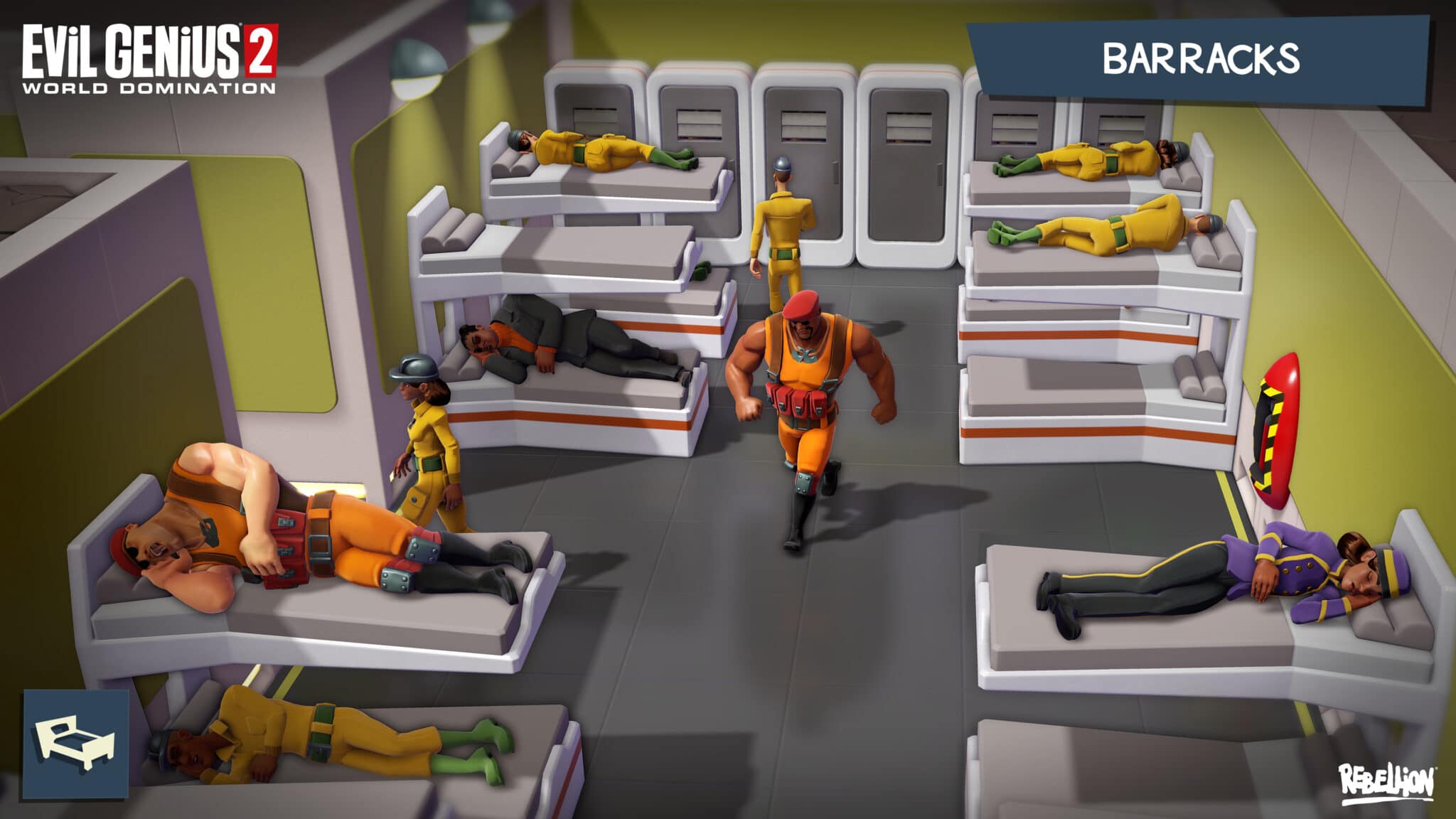 Of course, we have all sorts of rooms in the Lair for you to get your heads around – but you’ll want to pay special attention to the Barracks and the Mess Hall. These two rooms serve very important purposes in your Lair – helping to replenish your minions’ stats. A hungry workforce can’t perform adequately, and if your minions don’t have the rest they need to function, then your Lair is going to suffer.

The Barracks is actually the only room in the Lair that can contain Beds – which, as you might expect, are completely necessary for helping your minions rest up. They’re also one of the cheapest rooms in the game to build, because the value of a good nights’ sleep is absolutely priceless. Similarly, the Mess Hall is the only room in the game that contains furniture that allows them to take a lunch break – no snacking on the job. Your minions will automatically gather at these two locations when they feel either tired or hungry, which is definitely one less thing to worry about as you’re plotting your eventual World Domination.

Just keep an eye on those rooms. If a significant number of overworked, tired, hungry minions gather in one place for too long… Well, let’s just say that you might be a Genius, but you are outnumbered…

Until We Meet Again 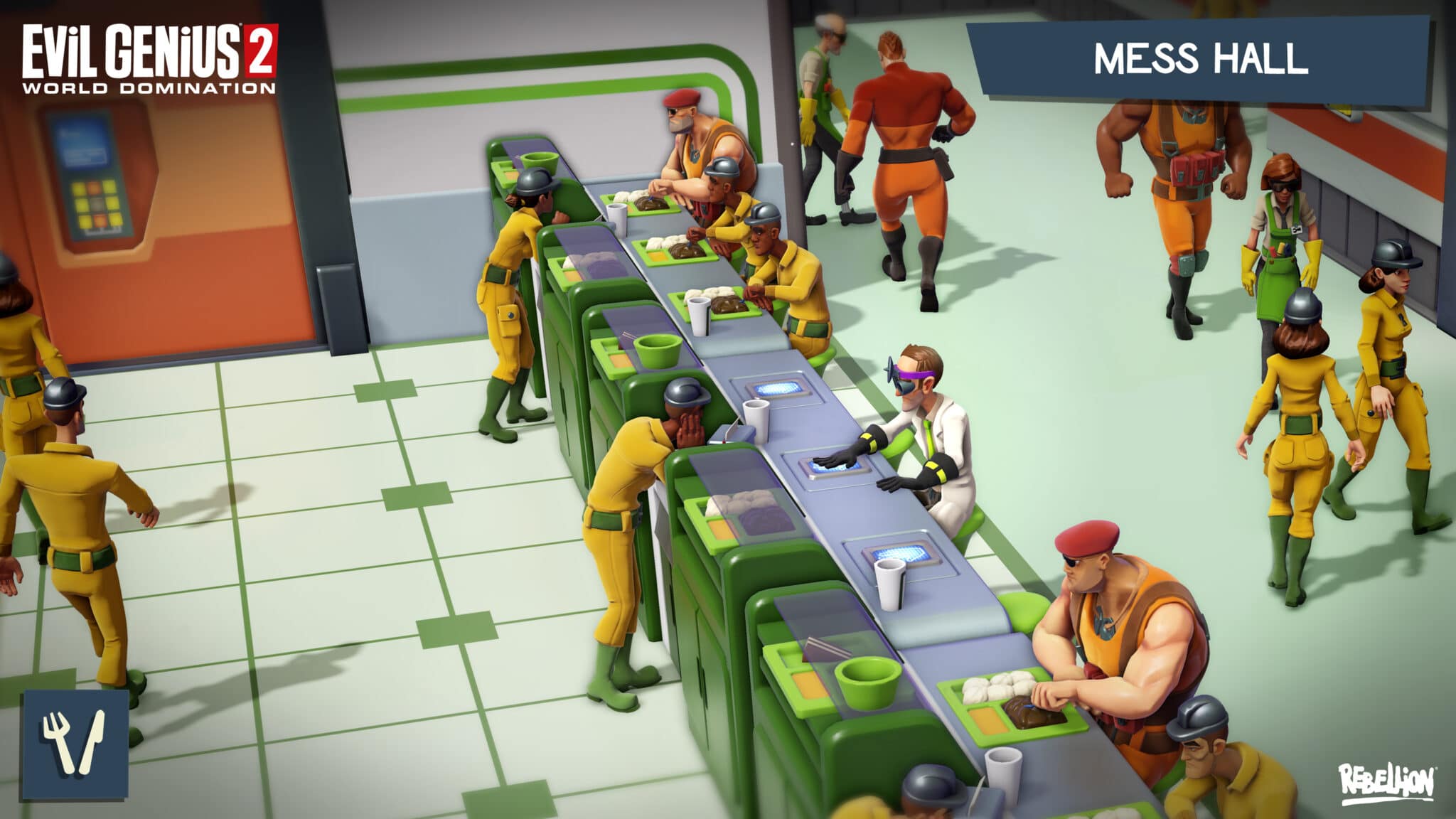 That’s it for Lair Building Basics. Remember, we’ll be back in two weeks’ time with yet another Dev Blog, so we’ll see you then. Until then, make sure you check out the Evil Genius 2 Discord Channel if you haven’t already joined – it’s a great place to chat to like-minded fans, and who knows – maybe a couple members of the dev team will pop in from time to time.

Maybe a couple of us are already there. Watching. Scheming. Waiting for you to betray your weaknesses so we can spring into action.