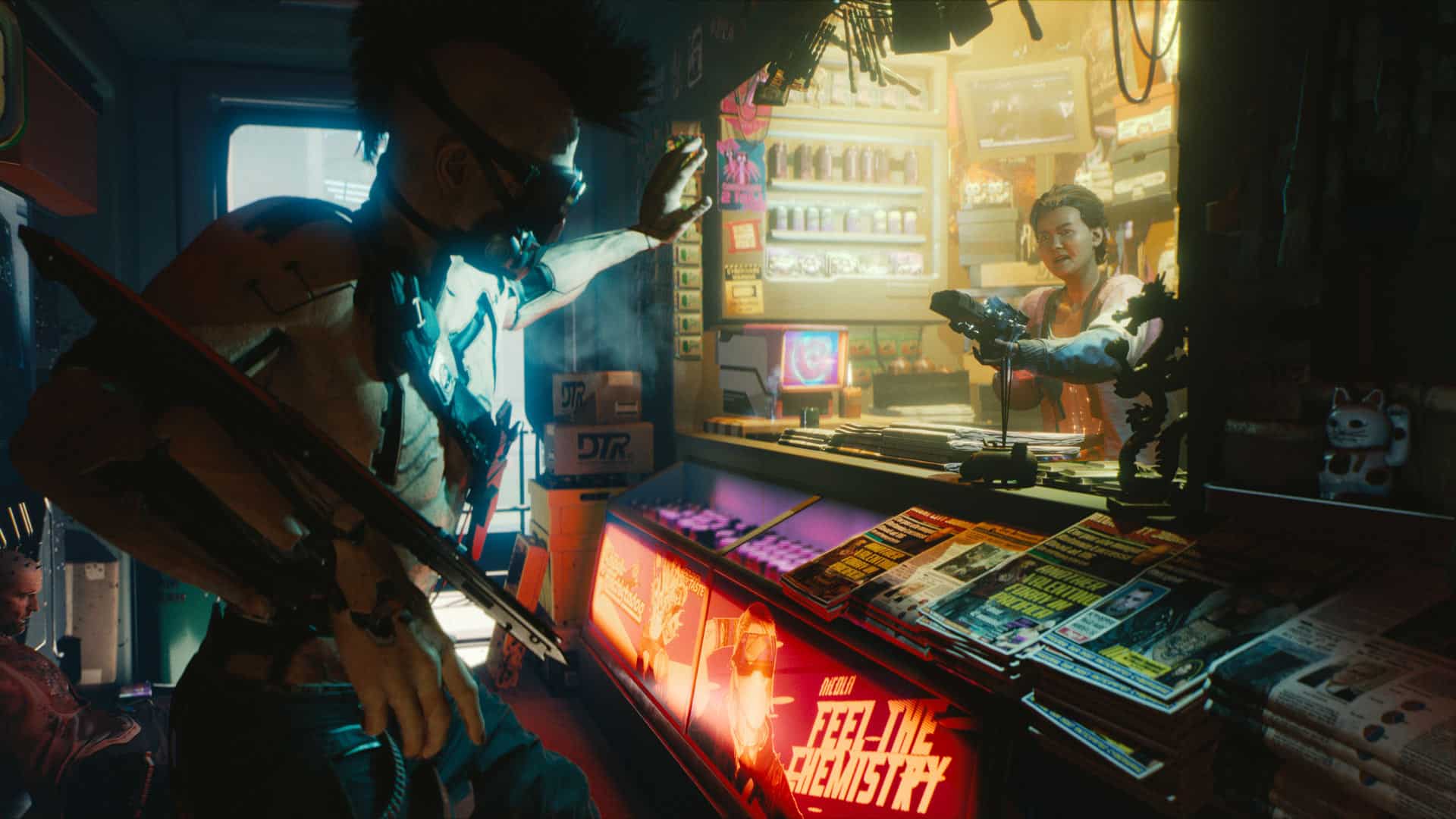 Relevant Things To Know About Cyberpunk 2077 Before Release

CD Projekt Red’s most hyped project to date is an open-world role-playing game based off of the Cyberpunk tabletop role-playing series. Cyberpunk 2077 has been in development since 2012 and is set in the near-future dystopian Night City — a bustling, busy metropolis enthralled by advancing technology and crime.

The game will feature Keanu Reeves, but he will not be the main focal point. Instead, players will take control of V, a hustler just trying to make his way in Night City. V’s story is written by the player, based on their actions and choices.

Players will be exploring Night City almost entirely from the first-person perspective. The game looks really good on all consoles, but don’t expect next-gen graphics. In fact, Cyberpunk 2077 does not currently have a next-gen version of the game available. The general consensus is that a version should arrive some time in 2021. Until then, Xbox Series X and PlayStation 5 owners will need to play the game via backwards compatibility.

Classes in the game are not permanent and instead favor an organic in-the-moment approach. This is a great design for players who would prefer to pick and choose their abilities based on what is or is about to occur in-game. There is a decent amount of character customization for “V” not only during initial creation but also through modification.

Cyberpunk 2077’s first-person combat will be more RPG and less FPS shooter. Think Deus Ex rather than something like Call of Duty or Destiny. Combat is set to be more tactical in its approach where stats are more important than mechanical skills.

The reason and importance for Cyberpunk 2077 going the FPS route instead of a third-person perspective like The Witcher 3 can be summed up from what Mike Pondsmith had to say:

“This is why it’s important; the one thing is the state of the character, the interfaces they use, the drugs they take, the way they deal with their implants–it’s all very, very internal to the head of the character, and if you step out of that out [into a third-person view] it becomes a busy hub that you’re tracking. On another technical level, the world is massively immersive and if you’ve stepped back from that into a third-person avatar dummy, you are not really a part of it.”

Associate design director Kyle Rowley claims that the design techniques they discovered from The Witcher 3 will have an impact on Cyberpunk’s combat.

“We learned quite a lot from the combat in Witcher 3, and we’re translating that to the lessons we learned in the gameplay about how to do melee and try to transfer that to Cyberpunk,” Rowley said. “Obviously it’s very different in the fact that we’re now doing it from a first-person perspective rather than from a third-person, but the lessons that we learned in Witcher, we can definitely translate.”

Players can invest in a multitude of abilities and upgrades that favor their playstyle. Focusing on cybernetic enhancements that boost hacking and stealth can help you sneak past foes and manipulate environmental aspects such as security cameras. You could always choose to invest points into added armor and weapon handling if you’re the “go in guns blazing” type.

Weapons will be divided into three categories: power, tech, and smart. There will be plenty of variations in weapons to add to your arsenal including mantis blades for melee, smart guns with bullet penetration and homing shots, and your standard pistol and shotgun fare.

The size of Cyberpunk 2077 is said to not be as large as The Witcher 3: Wild Hunt but far more dense and compact. The verticality and interior locations are likely to change minds about how large Night City truly is.

Players can explore the city, taking on missions, and run into potential allies to join them. There will also be driving, which can be refocused into a third-person view should the player desire, which could make the city feel that much larger.

Cyberpunk 2077’s campaign size will also be shorter than that of The Witcher 3: Wild Hunt as was quoted by the game’s quest designer, Patrick K. Mills.

“We do know the main story run in Cyberpunk 2077 is slightly shorter than The Witcher 3 because we got a lot of complaints about Witcher 3‘s main story just being too long. Looking at the metrics, you see tremendous numbers of people played through that game really far but never made it to the end. We want you to see the full story, so we did shorten the main story, but we have lots to do.”

What this sounds like is that the main campaign will likely be shorter but that there will be plenty of side quests and activities to spend your time on.

A multiplayer option will be coming to Cyberpunk 2077 but not at release. CD Projekt Red CEO Adam Kaciński has stated that “It’s a separate dedicated production, a big production. We think about it as a standalone product.”

Other than this, we haven’t received much information of the multiplayer experience and likely will not see anything until some time in 2021.

Venturing into cyberspace is seen as an escape from reality for citizens of Night City which will be an explorable world space within the game. Cyberspace is a staple of cyberpunk fiction and will be a crucial aspect of Cyberpunk 2077 and its plot. V’s brain implants hold the key to one of cyberspace most sought after secrets–we just don’t know exactly which secrets.

Corpos and local gang members will look to extract these secrets from V’s mind so players will definitely have to contend with enemies in both the real world and in the digital space.

Issues Along The Way

Cyberpunk 2077 has been the object of great anticipation by fans who loved The Witcher 3: Wild Hunt, released back in 2015. Though the hype behind the game has continued to mount, so has the skepticism and concern over development.

Cyberpunk 2077 has experienced a few delays, thanks largely to the COVID19 pandemic. But even more than that, CD Projekt Red has also faced some criticism surrounding how employees have been treated during the “crunch” as well as some of the marketing decisions.

In May of last year, during an interview with Kotaku, CD Projekt Red co-founder Marcin Iwiński explained that he wanted the company to be “more humane”. However, by the beginning of the following year, an obligatory crunch was imposed on some employees. A “crunch” is when employees are expected to work long hours of overtime during the nearing of an expected launch date. It’s actually a pretty common practice for the games industry. The “crunch” has continued throughout the year in the face of multiple delays from April 2020 to the most recent in November.

CD Projekt Red has also faced criticism over their use of a hyper-sexualized trans model in a promotional poster. The artist, Kasia Redesiuk, defended the poster claiming it was not meant to offend the trans community, but show how the corporations in the game use modified bodies to push products.

Cyberpunk 2077 will officially release on Dec. 10 2020 but some local game shops have already begun delivering physical copies to consumers. The problem is that Cyberpunk 2077’s day one patch does not yet exist, according to CD Projekt Red. So, if you’re one of the fans with a physical copy already in hand, you won’t be able to play until release regardless.

That being said, CD Projekt Red has already given us the release and preload times for Cyberpunk 2077. 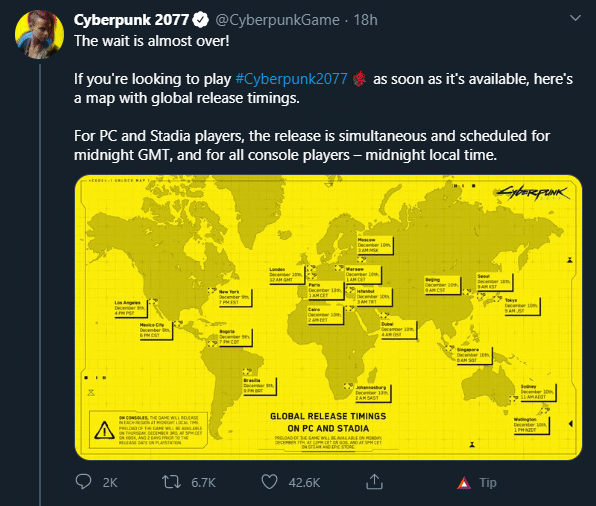 Pre-loading times for Cyberpunk 2077 are as follows:

After preload has been taken care of, you can begin playing at these times:

This is all of the information we currently have that is relevant to Cyberpunk 2077. Enjoy the game on December 10 and don’t forget to stop by the Twitter Gaming launch party starting at 6pm EST on Dec. 9.